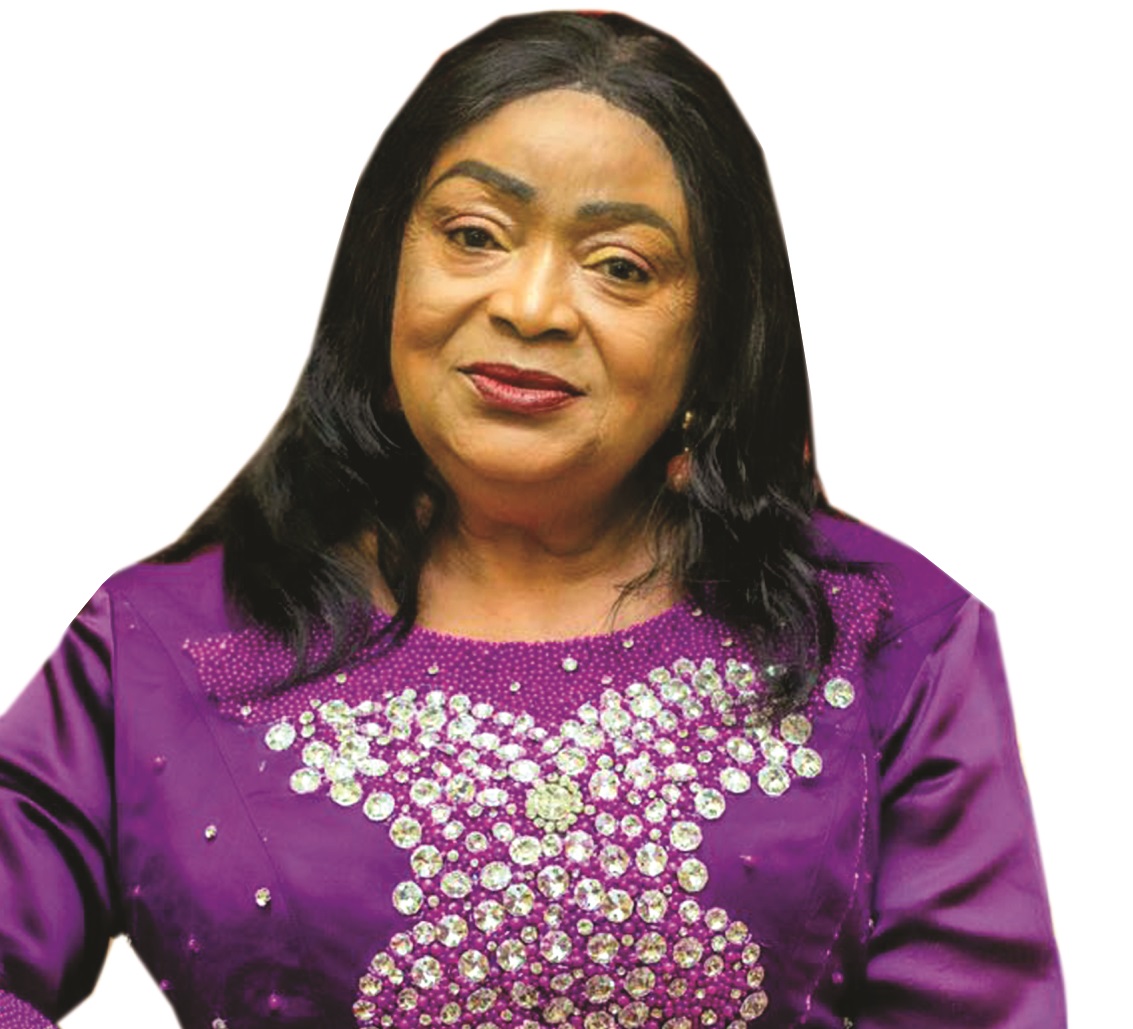 Chief Mrs. Atinuke Abioro is the widow of popular Lagos businessman Chief Bolarinwa Abioro who died over 20 years ago. Since his death, his widow has soldeired on. On October 23rd last year, she clocked 70 but she didn’t celebrate it because she didn’t want to make any noise about it. She plans to celebrate it this year October when she marks another birthday.

But the interesting thing about it is that this Ibadan woman does not look 70 at all. She is still very fit, smart and agile. Over the years she has managed to keep her great figure. She is tall and graceful in her carriage. Whats the secret City People asked her not too long ago and she explained that it is the grace of God, “I really can’t say this is what I do or this is what I don’t do. It takes the grace of God to see you through.”

How did she meet her late husband?

It was while she was working with Guinness Nigeria, she says. “He was always coming to Guinness”. She was PA to the Financial Controller. “One day he came with my uncle, Chief Lekan Salami. I greeted them and we helped. That was how we met. One day he came again and said he dreamt that he married me. I said you can’t marry me sir because you are married. That day I looked funny to him because I was in my sutana. He said haa, so they allow this in Guinness? I said yes, I am a Manager. He said this aso funfun people. But thats me. Thats what I believe in. I have always been an Osun child. My maternal grandmother is from Osogbo. I love water. I believe in it. He said, if I marry you, I will take you to Mecca. I laughed. I told him I was born a Muslim. So we just started chatting. He was a very humble man. He used to send tickets to me, for me to go to London for weekend. One day when my uncle was around, he now called me and I went to see them. He now said he dreamt again. My uncle now warned him that he should be serious about whatever he says to me because this one is not Touch and Go.

Before I knew it proposals came. He met my dad. That was how we got married in 1978. Before we got married he had promised me that he will let me continue working. But one day he told me he dreamt that I should resign from Guinness. That was how he stopped. Dr. Ubeku was the MD of Guinness. Baba Williams of blessed memory was there. I told all of them what my husband wanted and they supported me Dr. Abel Ubeku allowed me to go and write off my loans. I then left Guinness to become a full housewife. I was lucky I had become pregnant so I was expecting. Unfortunately, I lost the child. I told my husband I wanted to go back to school, I went to New Kent University in Mayfield, London to do my B.A. Business Administration.

Then I majored in Secretarial Duties. I finished it in 19 months. When I finished, I established a Secretarial School in Ikeja. I had a Boarding House. I was running that school till my husband died in 1996. When I later had my baby and came back, I was still running. But the teachers there were giving me problems. So I closed down the school. It coincided with students not wanting to go to Secretarial School again because of Internet taking over.

My husband spoilt me silly. He wouldn’t allow me do anything. He would do many things for me.”

Where was she born? Where did she grow up? “I was born and bred in Ibadan,” she says. “My parents are from Ibadan. I attended St. Peters, Aremo Anglican Primary School, Aremo. But later on, I went to St. Marys at Oluyoro. That is where I was converted. I became a Catholic. I went to a Secondary Modern School in Ibadan. That is where I first got the idea of Typing and Shorthand in Ibadan. I was always longing to read and read. So when I finished, I decided to go back to Secretarial School again. I didn’t know I was going to be as Orobo as I am now because my fathers wives used to call me Awelewa. I was so tiny and petite. If you saw some of my pictures and looks then you wouldn’t believe that I could be this fat. I finished at Isabatudeen Girls Secondary School. I gained admission straight into UCH.

I trained as a Nurse. But I never practiced. When I finished I went to Pitmans College in London. I went to do my nursing course just to please my dad. My dad was a retired nursing officer at Adeoyo Nursing Home. I trained at Pitmans as a Confidential Secretary. I worked brightly with Rank Xerox. I then came back home to Nigeria. I worked briefly with Midland and Manfield Insurance Company in Ibadan I later came to Lagos and worked briefly with Executive Secretarial Bureau in Ilupeju. From there I crossed over to Guinness. I entered Guinness as a Confidential Secretary and rose to the post of Manager before I finally left to go back to the University to study Business/Secretarial Administration. Since I stopped running the school, I have been running one of my husband’s companies.

He brought me on board of a company, Record Manufacturers. I love accounting. I was working with the Financial Controller I was helping them to look into the accounts. When he died, I was there working full time before I rose to become Executive Chairman where I am, up till now”.

How has she kept her youthful look over the years? How has she been able to keep looking young despite the fact that she is 70? “Its by the special grace of God,” she says. “I don’t have any special routine. I fast a lot. There are times I just decide to fast for a month. I worry a lot. Its now that my daughter has had a baby that I believe she has grown up. I use to worry a lot over her. I will keep calling her to ask how she is”.

As for her friends, she has been like the pillar they all revolve round. They look up to her for advice and she fights for them. How did she develop herself to that level? “That is an attribute I gained from my husband. I have a nickname among my friends. They will say go to Mrs. Abioro, that is the solution centre. And what is the solution? Nothing than to counsel them. I usually tell them don’t think ooo. If you think you are the only one who thinks, me too I think ooo. But I stopped thinking and worrying when I realised that the more you thin, the less you rely on God. And the more you rely on God the less you think. Lets have a glass of wine. Or less drink water.

Each time I say that they feel relaxed. Then I will say ok lets take the problem one by one. By the special grace of God, let us pray. I believe very much in the power of prayers. Before my husband died he was the Seriki Musulumi but he didn’t disturb me, he didn’t stop me from going to Celestial Church. I don’t joke with my God. I must praise my God. I have been going to Celestial Church since 1968 before I ever met him. All he will say to me is don’t wear your sutana the way you wear it about. He used to joke with me. Is there no where you can’t wear this your sutana too? I wear my sutana everywhere, to parties too. I am not ashamed of wearing it. I think it is by the special grace of God that I have friends who believe in me and my ability and they do reciprocate when I need their advice and support they are also there.”

What lessons has life taught her at 70? “A lot,” she said. “Initially, when I lost my husband I thought it was the end of the world. Most people don’t understand what widows go through. When you have a husband who was doing so much for you, and you lose him suddenly, you will panic. And that sometimes makes widows rush into relationship. I did too, but I quickly retraced my step because the relationship was not helping me. Instead it was bringing out the worst in me because I am naturally not an aggressive person. Once you find yourself in such a situation run to God. Make God your rock. Then, do not become a parasite on people for money.

That is why I don’t know how to beg people for money. How can I beg when some of my friends believe I am rich. Somebody said to me, sometime ago, so you don’t know they refer to you as the richest widow in Nigeria. I claim it. Do you know why they say that? Because I don’t go borrowing. I give out things a lot. Giving is good. I give things out to the Catholic Church. I was once a Catholic I went to St. Mary Catholic School at Oluyoro in Ibadan. I learnt about the art of Giving there.

They will accept whatever you bring. They will sanctify it. They don’t know need to know your name. What I just tell people is do not try to immitate. Do not try to copy anybody. Above all, do not miss your God, because there is no friend like Jesus”. She is one woman who always exudes a lot of confidence. How did she develop herself to that level? “It came out of all the lessons I have learnt from disappointments. Without disappointments you can never get any confidence. I don’t depend on people.

I take things as they come. You need self confidence. That has been my guiding principles. Last year, she celebrated 20 years anniversary of her husbands death. At the time he died, it was very traumatic for her. She was 6 months pregnant and she thought it was the end of the world. “I thank God for how he has helped me cope. When I look back I can see that I have not been decreasing, but God has just been increasing me, I have a healthy child and by the special grace of God I am a grandmother now. And 20 years after I give God the glory.

ATINUKE ABIORO Opens Up On Life @ 70 +How She Has Coped As A Widow was last modified: May 8th, 2017 by Seye Kehinde