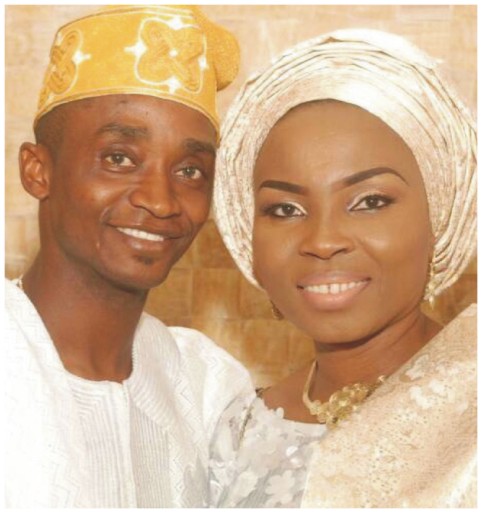 The serene town of Sagamu in Ogun State, shook to its very root when late Madam Janet Olasimbo Odebiyi was given a befitting burial by his children and grandchildren in a 3 day ceremony from Thursday, 1st of February to 3rd February, 2018. It was one event that made celebrities more from Lagos to Shagamu to celebrate with Lagos big boy, Bashir Fakorede and his pretty wife, Tayo Fakorede. Many attendees were guests of Tayo Fakorede who was the deceased’s granddaughter. Her grandmother has a tie with the Osinbajos and not only were top dignitaries present at the party, Her Excellency, Mrs.Dolapo Osinbajo, the wife of the Vice President, Prof. Yemi Osinbajo was at the burial. City People Society Editor, TAYO FAJORIN OYEDIJI brings you gist.

Many pray for their mothers or parents to live long, not only live long but in good health too. The Odebiyi families, both nuclear and extended are happy that the deceased lived a glorious life and no wonder she was given a befitting burial. The loving woman died at the ripe age of 97 years after living a fulfilled life on earth. Her life and times were celebrated in a unique way and Mama journeyed home peacefully owing to the grand burial put up for her in Sagamu. She was married into the illustrious families of the Odebiyi and shares a family lineage with the Osinbajos.

ABOUT THE 3 DAY PARTY
Mama’s journey to mother earth started on Thursday with a service of song at her residence along Hospital road in Sagamu in the evening and many of her church pastors, members, societies and mostly family members graced the evening of songs. It was followed by a Christian wake keep on Friday, 2nd, February at College Crescent, Oja Oba while the funeral service took place also at College Crescent and guests were entertained at The Akarigbo Remo Hall, Ita Oba, Sagamu in Ogun State. Mama’s children, grandchildren, and family at large all came together and made sure mama was given a grand farewell.

AT THE CLASSY RECEPTION
After the funeral service and the deceased had been laid to her final home, all guests converged for the exclusive reception at The Akarigbo Remo Hall in Ita Oba, Sagamu. It was a well structured hall. The atmosphere was cool, the settings was right and there is a touch of class everywhere. Start from the arrangement of the whole event, where all the tables were tagged, making it easier for guests to locate his or her people. Not only that, every table was with its drink-buckets with almost all brands of drinks, including water available. Everything was arranged in such a way that you don’t have to know anybody before you are attended to, no matter whose guests you were. Everybody had fun all through.

VP’s WIFE, DOLAPO OSINBAJO STORMED SAGAMU
Her Excellency, Dolapo Osinbajo stormed the burial with her entourage. She is also a family member of the deceased and anything that the Fakoredes are doing, she will always be there because she shares a family tree with Tayo Fakorede popularly called Tayo Fak. We can not forget in a hurry when she also stormed the burial of her husband, Aare Bashir Fakorede dads’ burial 2 years ago. She looked beautiful in her usual simple outfit with minimal jewelry.

AARE BASHIR & WIFE STOOD OUT
They are hot couple, rich and sophisticated, they never make so much noise about their achievements but they are big in every sense of it. Aare Bashir Fakorede stood behind his wife to give her grandma a befitting burial. Almost all the big boys in Lagos stormed Sagamu all for the Fakoredes.

This is not the first event they will be hosting and they never deliver anything less of a classy gig anytime they are celebrating. Aare and his wife looked lovely in their Ankara Aso-Ebi and white headgear and cap. The business mogul and Chairman of Bash Oil, Aare Bashir Fakorede who has invested his life on Petroleum, Oil & Gas business has been a successful business man at early age, he is also a business man with well established organization known mainly for Oil & Gas marketing which he has taken to the next level and has propelled him to stand out as one of the largest dealers in Oando Marketing Plc. He is the son of late Alhaji Olajire Fakorede while his wife,

Petite, delectable and beautiful Tayo has a lovely smile that endears her to many friends. She was the chief host of the event because it is her grandma’s burial. She pulled a nice party and many of her friends of so many years stormed Sagamu for the party. She is the MD of Bash Oil where her husband plays the chairmanship role, and she also runs other businesses. She is known for her exquisite jewelries and unique laces which she rocks to parties.

She looked younger than her age and this tells you she is living a good life. We cannot forget in a hurry her husbands farewell burial for his dad 2 years ago, she was the cynosure of all eyes. She has been stepping out back to back for parties and attending the Elegushi weddings being her most recent outing. Surely, this simply tells us that she is stylish.

QUEEN AYO BALOGUN’S ELECTRIFYING PERFORMANCE.
President of Association of Juju musicians, and Queen of Juju music, Queen Ayo Balogun THE was musician of the day. She did wonderfully well with her performance to the excitement of all guests. In fact, her cool beats and lyrics seemed to have gotten to many guests in good measure, so much, so that even some celebs who don’t normally dance didn’t know when they started digging it. She sang praised almost all the celebrities present and was sprayed silly with some bails of naira notes.

SOCIETY WOMEN AND THEIR HOT STYLES
Trust the society women as they always register their presence anywhere they find themselves, especially at social functions. They came in different attires and styles, even those who did not participate in the Ankara Aso-Ebi looked gorgeous with their different styles and head gears. The colour was royal blue and white. Most guests wore the multicolor Ankara with white head gear. Sighted amongst many women were Ijeoma Ubosi, Mrs. Dolapo Osibajo, Lara Osinbajo, Sade Balogun, Ayo Balogun, Pamela Shodipo, Bisi Emiola, Ufoma Ugorji, Alhaja Moji Sunday, Dr. Mrs. Ajayi, Oloori Ajetunmobi, Kehinde Gafaru, Mrs. Ipaye and host of many others.

ALL EYES ON
SADE BALOGUN
When you attend A list parties, one face that you will surely see is that of Lagos society woman, Sade Balogun. She has been rocking the social scene for the past 30 years and has not slowed down. One thing you will notice at a glance is her glamorous dressing which readily fits her well structured stature. Do we need to tell you about her head gears and make ups? Always on-point. She has a great physique and well connected within the inner circles of the social milieu. She is also a titled Chief in Itori, Abeokuta.

KONTESSA SHOE BOSS, IJEOMA UBOSI SUPPORTed HER FRIEND
Stylish and pretty luxury enterpreneur, Ijeoma Ubosi was at the burial. The beautiful woman who chooses the party she attends was all glam in her lovely aso ebi. Her make up was also on fleek. She stormed Sagamu to celebrate with her friend, Tayo Fakorede both of whom were high school friends. The England born big babe Ijeoma or Kontessa as she is fondly called is the pretty wife of Chris Ubosi, the Chairman of Classic Fm and Beat Fm. She jollies with her good friend of many years, Pamela Shodipo.

QUILOX BOSS SHINA PELLER SPRAYS ENDLESSLY
At the party was the king of night club, Shina Peller. He is the boss of the wave making nite club, Quilox on the Island. He was at the party and he enjoys listening to Queen Ayo Balogun’s songs, no wonder when Queen mounted the stage and started praise singing him, he rolled out bails of naira notes and the Queen sang endlessly. The handsome dude who is a title holder as Otunba in Lagos had his table littered with exotic drinks.

ETI OSA LG CHAIRMAN LEDS OTHER MEMBERS
The Chairman of Eti Osa Local Government which covers the vicinity where the Fakoredes trade, Hon Saheed Adesegun Bankole who also shares a close friendship with Aare Bashir was at the burial party. He was there with his beautiful wife and they wore the Aso-Ebi as well. They had a nice time all around.

LAGOS BIGGER BOYS, SHOWED UP
One table that was not devoid of various delicacies and exotic drinks, like champagne and cognac was Segun Oniru’s table. His table bubbled all through the party and all his allies, especially Oba Akinsiku Dosunmu, Oba Elegushi and many others who sat with him had their mouths and throats watered throughout the event. Aremo Segun Oniru was the former Commissioner for Lands in Lagos and also one of the heir apparent of Oniru of Iruland, Oba Idowu Oniru.