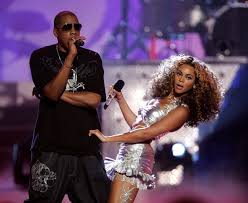 Jay-Z and Beyonce filmed “Apes**t” at the Louvre and now you can take a tour of the museum based on the music video. Keri Lumm shares more. Buzz6

Fans were out of their seats at MetLife Stadium Thursday night for the Beyonce and Jay-Z, but not in the way you might expect.

Severe weather caused a delay at the show in East Rutherford as stadium officials asked fans to leave their seats and take shelter inside. Fans were let back in at about 10:35 p.m.

Dark clouds hovered over the stadium all night as North Jersey had a rainy day with thunderstorms in the evening.

The delay came right as the headliners were taking the stage.

The concert finally began shortly after 11 p.m. and Beyonce thanked the crowd for waiting.

Crowds return to the lower portion of MetLife Stadium after it was cleared out due to severe weather Aug. 2, 2018. (Photo: Elyse Toribio/NorthJersey.com)

The weather interruption left some fans confused, amused and annoyed.

Y’all ain’t gonna believe this. They’re “evacuating” MetLife stadium. Basically everyone has to seek shelter because of possibly lightening. Insanity. Jay & Bey were literally walking out onstage when they announced it. #OTRIIpic.twitter.com/IhZPI9dSck

@MattBellassai i want to know your thoughts on Metlife Stadium evacuating the Beyonce concert during the thunderstorm, and specifically why the god of Thunder chose to spare DJ KHALED

On the run (from thunderstorms apparently) #OTRII#thunderstormdelay#beyonce#jayz#thecarters#suitelife#metlifestadium @ MetLife Stadium https://t.co/ga0awDnTVh

Met Life stadium has been evacuated due to a heavy rain storm.. i guess Beyonce and Jay Z aren’t up for dancing in a storm in their best dress… Fearless…

At @MLStadium for Beyoncé and the sky is about to open up. Like now. pic.twitter.com/3RnY6HdkT0

Hey yo @mlstadium is the @Beyonce concert happening or not? Some of us have babysitters waiting at home!

METLIFE STADIUM SERIOUSLY NEED TO GET A ROOF ?

But the show went on.