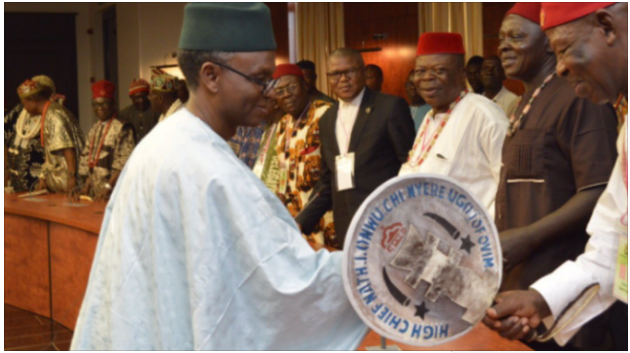 The entire Igbo community comprising stakeholders from the south-east, have told the coalition of Arewa youth that Igbo would remain in the north.

The Arewa group had earlier given those from the south-east a deadline of October 1 to quit the region but the elders said they have found a home.

They visited Nasir el-Rufai, governor of Kaduna state on Tuesday.

“We are not happy with the call for division. We want Nigeria to remain as one so that all of us can benefit. Northern youth have been our brothers. The Igbo are not going anywhere, we will remain with our Arewa brothers in the north.” Chikezie Nwogu, president-general, Igbo Delegate Assembly, said. commended the federal government and government of Kaduna, over the manner they handled the issue.

He commended the federal government and the government of Kaduna for the manner in which the issue was handled.

“We are here in Kaduna to hold a meeting based on what has been happening in the north, especially with the Arewa Youth and the ultimatum given to Igbos and the agitations by IPOB,” he said.

“We are not here to condemn anybody.We thank the governor of Kaduna State, Mallam Nasir El-Rufai and other northern governors, traditional rulers and the federal government for their interventions at the heat of the issue.”

‎”Let us look at the problem of the youths when there arcomplaintsns, it is also  good to restructure in a way that will benefit everyone,” he said.

El-Rufai, who had earlier ordered the arrest of the Arewa youth, insisted that those behind the quit notice must be arrested.

He said the state, which had been affected by different crises, would not tolerate sensitive comments that could incite and cause disaffection among the people.

“We are going to arrest the Arewa Youth and bring them to justice no matter how long it takes. Since the press conference was done in Kaduna,” he said.

“If they had done it in any other place, we would have just condemned them but since it’s in Kaduna, we are going to arrest them.

“Kaduna used to be a home for all, but so much crises have left the divided across religious lines”

He assured his visitors of their safety in not just Kaduna but across all the 19 northern states.

“I have the mandate of the northern governors’ forum under the chairmanship of Borno State Governor, Kashim Shettima, to reassure the Igbo in the 19 northern states and Abuja that their lives and property are safe in the north,” he said.