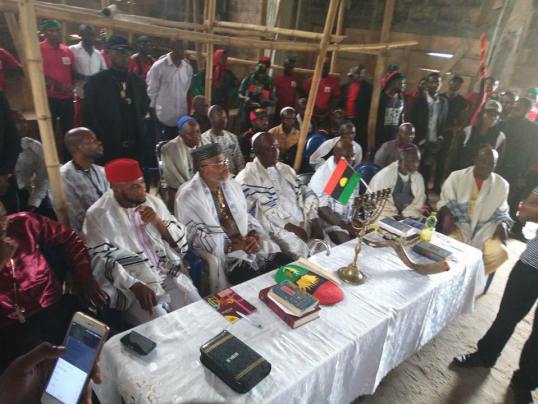 The leader of the Indigenous People of Biafra, Nnamdi Kanu, on Monday, said Igbo must not vacate the North, or any other part of the country, as a condition for the actualisation of the agitation for Biafra.

The IPOB leader spoke in an interview with some journalists in Enugu, where he received awards from a number of pan-Igbo groups, including the Igbo Women Assembly, the Eastern Consultative Assembly and the Igbo Students Union.

Reacting to the ‘quit notice’ issued to Igbo in the North by a coalition of Arewa youths, Kanu noted that secession from Nigeria did not imply that Igbo must leave the North, or other part of the country as suggested by the ultimatum issued by the northern youths.

He said, “You are aware that Scotland is seeking to leave the United Kingdom? Are you remotely implying that every person from Scotland, who lives in England, should now return to Scotland?

“Britain just left the EU. Are you now implying that every British citizen in the EU should come back to Britain in order to finalise that process of extraction of Britain from the EU?”

Kanu noted that what he described as “poor education” was responsible for the impression that Igbo must leave other parts of Nigeria in the event of the actualisation of Biafra.

The Biafran agitator added that he would not take issue with the Arewa youths, who he described as “inconsequential.”

Kanu, nonetheless, warned that Igbo, who resided in the North, were doing so at their own peril.

According to him, Igbo resident in the North are “sacrificial lambs” who could be killed at any moment.

Asked if Igbo in the North should ignore the notice to quit, the IPOB leader stated, “It is up to them. They have been in the North, and they (northerners) have been killing us (Igbo) since 1945.

Kanu insisted that the governorship poll in Anambra State, scheduled to hold on November 18, 2017, would not hold unless the Federal Government acceded to pro-Biafran agitators’ demand for a referendum.

Asked if he was not bothered that Ohanaeze Ndigbo had overruled his call for the boycott of the poll, Kanu said he was in charge of the people “100 per cent.”

He added, “No, I’m not (bothered) because the people are with us. We control the people 100 per cent and come Anambra, on the 18th of November, 2017, the whole world will be amazed.”

Although he said he was certain that the people of Anambra would boycott the election, Kanu said IPOB did not intend to stop anybody who decided to vote.

“We are entirely peaceful. We are not stopping anyone from voting. If you want to vote, you can go and vote. We are democrats,” he said.

Kanu added that the planned referendum would, once and for all, settle the debate between Biafra and restructuring.

The IPOB leader said, “We are calling for a referendum so that the people can actually decide, once and for all, what they want, for themselves; not anybody deciding for them.

“I have not argued Biafra from the standpoint of absolutism. I am not saying you must vote for Biafra. I am asking the powers that be in Nigeria to allow the people to determine for themselves.”

Reacting to his bail conditions, the IPOB leader said the court, which barred him from granting interviews, could not stop him from speaking.

He said, “I am not giving an interview, I am responding to the question you asked me. The judge is a very learned fellow. She cannot stop me from speaking.”

Earlier, Kanu had assured a delegation of the Igbo Women Assembly, led by Mrs. Maria Okwor, that the menace posed by Fulani herdsmen in parts of the South-East “would come to an end before the end of the year.”

He equally told members of the Igbo Students Union, who honoured him with the title of ‘Light of the People’, to join IPOB and propagate the struggle for Biafra on the social media.

Meanwhile, IPOB, on Monday, alleged that some top politicians were plotting to kill Kanu, its leader, and other principal officers of the group.

It said huge amount of money and political patronages had been offered to certain people to execute the plot.

In a statement by the group’s Media and Publicity Secretary, Emma Powerful, IPOB said any attack on Kanu would radicalise the Biafra struggle in a manner nobody could stop.

The group named certain governors, an elder statesman, a socio-cultural organisation, a security chief and a religious head as some of those masterminding the plot.

The statement added, “But we promise them that any attack on Nnamdi Kanu or assassination attempt will radicalise the struggle for Biafran independence to the point which no one can contain.

“We are reminding those evil plotters that if anything happens to our leader, Nnamdi Kanu, who has been using non-violent methods for Biafran liberation since the inception of IPOB, that they will experience what they have not seen before since the creation of the contraption called Nigeria by the British.”