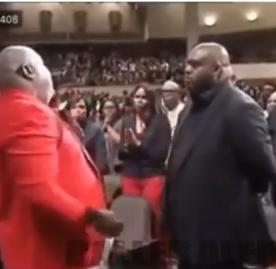 Pastor John Gray has been in the news a lot in the past few months, especially because of the backlash that followed after it emerged that he cheated on his wife Aventer Gray then bought her a $200,000 Lamborghini to compensate for his infidelity.

The backlash was so bad that John Gray revealed that he had suicide ideation. Gray, who recently became pastor of Relentless Church in Greenville, South Carolina, after serving at Joel Osteen’s Lakewood Church in Texas, said 2018 was the worst year of his life and that he had battled suicidal thoughts..

He said in a recording of his sermon to his church on New Year’s Eve:

Pastor John Gray was at a special leadership training session at First Baptist Church of Glenarden in Marlboro, Maryland, on Saturday, Jan 5. There, Bishop TD Jakes revealed to Gray that the spirit of suicide was still lurking in his home. TD Jakes then went ahead to cast out the spirit of suicide from John Gray during a special deliverance session.

I don’t even want to open this up in public because I know how deep it is.

Bishop Jakes then laid hands on Gray and shouted: “I call it out” as he cast out the spirit of suicide from Gray.

Jakes later told Gray that God was using the storms in his life to “make a man out of you.”

But a lot of social media users were not impressed and said Jakes and Gray were trying to make escuses for Gray’s behaviour by blaiming it on the evil spirit. Some pointed out that we might as well blame the evil spirits for all our actions and no one should ever be held accountable.

However, there were those who felt that the devil is fighting specially the men of God which is why Gray is facing such trials. They said it was kind of TD Jakes to step in and offer spiritual support.

Rapper MI Cries Out -“Falz Needs To Be Protected At All Cost.