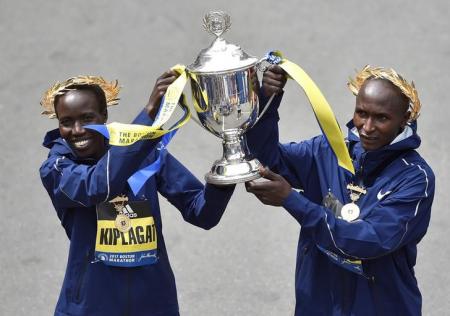 Geoffrey Kirui and Edna Kiplagat produced a Kenyan sweep at the Boston Marathon, winning the men’s and women’s races on Monday by conquering the race’s hilly final miles to establish their dominance.

Kirui finished in two hours nine minutes and 37 seconds after holding off a challenge by American Galen Rupp in the race’s final stretch down Boylston Street, the site of the deadly 2013 bombing attack.

“He put in several surges and I was able to cover a few of them,” Rupp told reporters after the race.

Kiplagat, a 38-year-old mother of two whose resume includes marathon wins in London, Moscow, New York and Daegu, ran alone for the final miles of the race and finished in 2:21:52, almost a minute ahead of Bahrain’s Rose Chelimo.

The Kenyan maintained her comfortable lead despite briefly stopping in the final miles when she realized she had grabbed a rival’s water bottle from an aid station and went back to return it.

“I had to put back something which was not mine,” Kiplagat told reporters. “I was afraid because you know, if you miss water it can affect you.”

Security was high along the course, which begins in Hopkinton, Massachusetts, and passes through Boston’s suburbs to the finish line, where a pair of ethnic Chechen brothers on April 15, 2013, set off two homemade bombs, killing three people and injuring more than 200.

Meb Keflezighi, who in 2014 became the first American to win the race in over three decades, finished 13th in his final Boston Marathon.

Keflezighi, who plans to retire from racing after the New York City marathon in November, stopped after his victory to touch the hand of Bill Richard, whose 8-year-old son Martin was the youngest person to die in the bombing.

“In 2013, I was a spectator just like the three victims and when I saw the 8-year-old … the first thing in my mind was that could have been my daughter,” said Keflezighi.

Tens of thousands of people packed the streets for Boston’s largest sporting event, held on the Patriots Day holiday, which commemorates the start of the American Revolution.