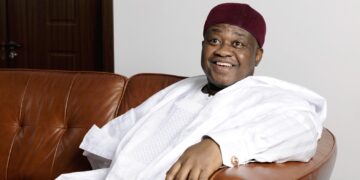 The publisher of Leadership newspapers and fiery columnist, Sam Nda-Isiah, has died at the age of 58.

Although details of the death are sketchy, family sources confirmed to DAILY NIGERIAN that he died around 11pm on Friday of suspected COVID-19.

In a statement by Femi Adesina, spokesman for the presidency, President Muhammadu Buhari described him as “a friend and ally.”

The president condoles with the media fraternity, the Nda-Isaiah family, friends and associates of the deceased, saying “the country has lost a man of conviction, a resolute and dogged believer in a better Nigeria.”

He wrote the famous Monday Backpage column in Daily Trust before establishing Leadership Newspaper Group in 2001, and shifted to it to his medium.

My Son Jide Awoyinfa Who Weds Today In Ibadan Says: I Struck A Gold By Mike Awoyinfa