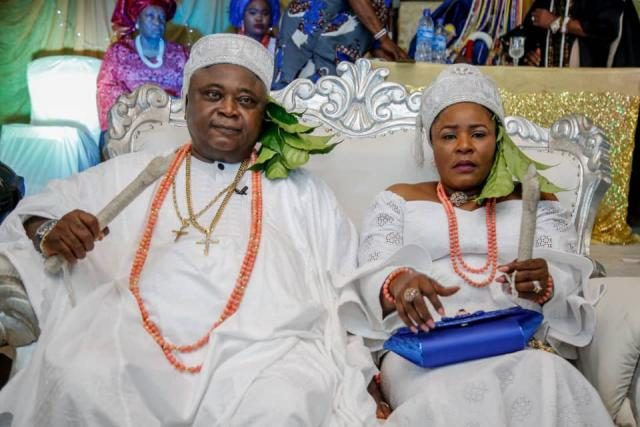 It was a double star for Hon. Dr. Oladipupo Adebutu and his wife, Omolara Adenike Adebutu who both bagged two different chieftaincy titles on Saturday, December 12, 2020, in Abeokuta, Ogun State.

Hon Ladi became the Lisa Aje Egbaland while his wife became Erelu Lisa Aje Egba on the same day. The title was conferred on them by the paramount ruler and Alake of Egbaland, HRM, Oba Michael Aremu Gbadebo.

The event which had some of the most influential royal fathers in Yorubaland held at the palace of the Alake of Egbaland in Abeokuta.

HIM Oba Adeyeye Enitan Ogunwusi, the Ooni of Ife topped the list of the dignitary royal fathers in attendance. Others are the Elepe of Epe, HRM Oba Adewale Osinberu, Oba Adeleke Idowu Basibo who represented the Akarigbo of Remo. Also in attendance was HRM, Oba Adeyemi Abdulkabir Obalanlege (Lanlege Ekun II, Arole Iganmode) the Olota of Ota.

Before arriving at the Alake’s palace, Hon Ladi and his wife had stormed the Ijeun community town hall where they bagged the title of Mayegun Ijeun and Yeye Mayegun Ijeun respectively.

Hon Ladi Adebutu is an astute politician, a businessman of repute, one of the biggest employers of labour in Ogun state and a philanthropist who has touched the lives of many indigenes and non-indigenes of Ogun state.

He is also a strong member of the People’s Democratic Party (PDP). In 2015, during the general elections, Ladi Adebutu was elected into the National Assembly to represent the interests of the Remo, Shagamu and Ikenne constituency. He also held a position in the House Committee on Rural Development.

He ran in the 2019 gubernatorial race where APC emerged the winner. Unconfirmed reports have it that he is still eyeing the topmost political seat in Ogun State.

READ ALSO: MY SON JIDE AWOYINFA WHO WEDS TODAY IN IBADAN SAYS: I STRUCK A GOLD BY MIKE AWOYINFA

Sujimoto’s Banana Island Project to be the next Downtown, Dubai