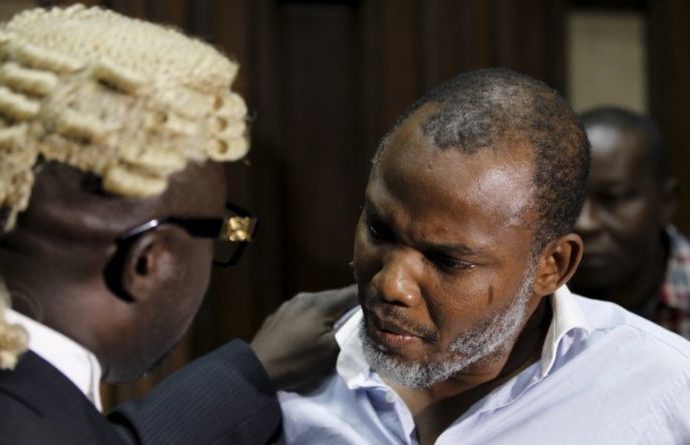 They alleged that the conditions were meant to ensure that Kanu never breathes the air of freedom.

In statement signed by IPOB spokespersons, Barrister Emma Mmezu and Dr. Clifford Chukwuema Iroanya, the pro-Biafran group said the bail condition were not only defective, but also smirks of judicial recklessness, rascality, and reeks of tribal and religious bigotry.

“From these bail conditions deviously handed out by Justice Binta Murtala-Nyako, it is obvious that this is a case of the voice of Jacob and the hands of Esau. In other words, those bail conditions were written by Retired Major General Muhammadu Buhari and handed over to Justice Binta Murtala-Nyako to read out in court. We therefore, call upon the Chief Justice of Nigeria to intervene and salvage whatever remains of the tattered image of the Nigerian Judiciary.

“Justice Binta Murtala-Nyako has turned the Judiciary on its head with these laughable and ludicrous bail conditions. She has made history in the Nigerian Judicial System as the first Judge to introduce religion and tribe into bail conditions in a non-religious court case. Justice Binta Murtala-Nyako has defamed the Nigerian Judicial System by violating the fundamental human rights of an accused person as stipulated in the various United Nations Conventions as well as in the relevant sections of Chapter Four of the Retired General Abdulsalami Abubakar-unilaterally written Constitution of Nigeria”

“Of what use is granting someone bail on health grounds while at the same time refusing the person to travel to any place in the world where he or she wishes to have satisfactory medical services? Why should Justice Binta Murtala-Nyako restrict Nnamdi Kanu to receiving medical treatments only in Nigeria through the seizure of his International Passports? What has Nnamdi Kanu attending any rally got to do with the ongoing court case? If in the process of receiving medical treatments, the physician determined that Nnamdi Kanu should be put on bed rest, so should the bail be revoked because he will not avail himself of trial at all times?

“We can confirm from the immediate family of Nnamdi Kanu that his official religion is Christianity, hence we are at loss on why a respected Jewish leader must be one of the sureties. As far as we know, Nnamdi Kanu has British and Nigerian passports, so why stipulate a respected Jewish leader as one of the sureties? Secondly, why specify that another surety must be of Igbo extraction? Is Igbo the only tribe in Biafra or in Nigeria for that matter? Has there been any precedence where a surety was required to come from a particular tribe?“

“These bail conditions are laughable and defective and must be totally overturned. In addition to granting an unconditional release to Nnamdi Kanu, we demand that the other three detained Biafrans, namely Chidiebere Onwudiwe, Benjamin Madubugwu, and David Nwawuisi must also be released unconditionally. Nothing less will be acceptable to Biafrans. Justice Binta Murtala-Nyako must jettison the bail conditions she handed out to Mazi Nnamdi Kanu and proceed to unconditionally release all four Biafrans immediately“ the group said.