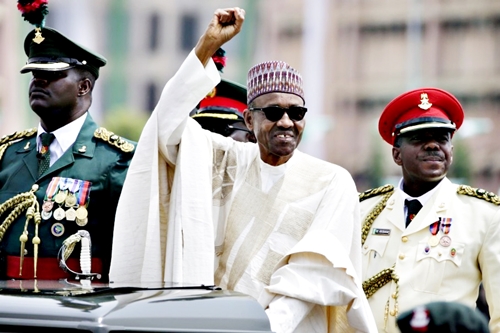 President Muhammadu Buhari has expressed shock that the Peoples Democratic Party, PDP, is determined to return to power in 2019 despite the alleged atrocities they committed while in power.
Buhari said this during an interactive session with community leaders in Kano as part of activities to round off his two day visit to Kano.
According to Buhari “The atrocities committed by this group against the country are still fresh in our mind, and coming to think of it that they are dreaming to stage a comeback is highly surprising.”
“This group plunged the country into the unnecessary economic mess owing to wanton looting of our common wealth.
He maintained that those who have the onus to administer justice on corrupt individuals are themselves complicit of corruption.
“It becomes difficult to confront it head on. In a raid conducted by security agents on the resident of a Federal High Court judge recently, they found in his possession four diplomatic passports, huge amount of hard currency and other incriminating documents bordering on economic crime, and these are the same guys empowered by the constitution to dispensed justice on saboteurs,” Buhari said.
Buhari had also revealed why he said, “I belong to everybody and belong to nobody” during his swearing in after he won the 2015 presidential election.
Buhari Reveals Why PDP Must not Return to Power in 2019 was last modified: December 8th, 2017 by Arinze Ago