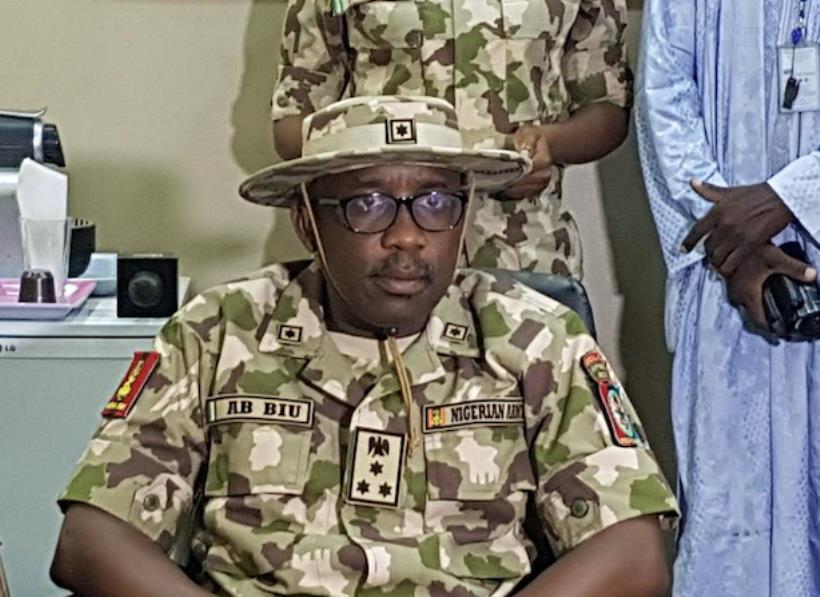 While Nigerians mourned and the military hoisted its flag at half-mast over the killing of six Nigerian soldiers in a fierce combat with Boko Haram insurgents in early July, the commander overseeing the war was busy staging a lavish party to celebrate his latest promotion.

Bulama Biu, the general officer commanding, 7 Division of the Nigerian Army, based in Maiduguri, was elevated as a major-general on July 9 based on his “extraordinary feats, exemplary leadership, commitment and valour,” according to a military statement which cited President Muhammadu Buhari’s reasons for the recognition.

On July 17, Mr Biu spoke about his promotion in an open message to Boko Haram insurgents, admonishing them to “celebrate” with him or risk being wiped out.

“I want to assure them that I have returned to Maiduguri more reinvigorated, well energised,” the army chief was quoted by Sahara Reporters as saying.

But around 6:00 p.m. on July 17, barely hours after Mr Biu’s media address at the theatre command headquarters in Maiduguri, Nigerian soldiers came under attack about 50 kilometres away in Jakana, a midsize town which Boko Haram has long used as a base along the Maiduguri-Damaturu Highway.

The fierce combat ended with at least six soldiers killed, and several Boko Haram fighters gunned down. A colonel and a captain were amongst those who lost their lives.

Dozens of soldiers who were seriously wounded in the attack were taken to the military hospital in Maiduguri.

But as Nigerians mourned with the families of the departed brave officers, Mr Biu threw a party in Maiduguri, inviting top politicians like the governor of Borno State as guests.

Journalists obtained a flyer of the event and a picture of Mr Biu sharing a table with the governor.

Mr Biu did not return PREMIUM TIMES‘ requests for comments on the matter.

The spokespersons for the Defence Headquarters and the Nigerian Army Headquarters, Onyema Nwachukwu and Sagir Musa, also did not return separate requests for comments for more than a week.

The 7 Division, which Mr Biu heads, was created in August 2013 to coordinate the war against insurgency across Nigeria’s northeastern flank. The division has had several GOCs since its creation, and Mr Biu became the latest in May 2018.

Mr Biu’s decision to embark on a jamboree even as the killing of six soldiers was still fresh has a tendency to demoralise troops, said security analyst, Charles Omole.

“It also affects soldiers’ capacity to be proactive in the theatre of war. There is an element of proactiveness necessary when fighting. But now they wait until they are told by their superiors what to do before they do anything,” he said.

Mr Omole said Mr Biu was insensitive probably because he also witnessed a lack of empathy from the country’s top officeholders, including presidents.

“Both Goodluck Jonathan and Muhammadu Buhari are guilty of insensitive and demoralising acts,” he said. “Both of them have been sighted at parties shortly after a devastating terrorist attack.”

“One major thing that affected George Bush’s presidency was when he flew over the destruction of Hurricane Katrina with a helicopter,” Mr Omole said. “He never recovered from it and he regrets that action even more than a decade after he had concluded his presidency.”

Court strikes out charges against Ekweremadu over...