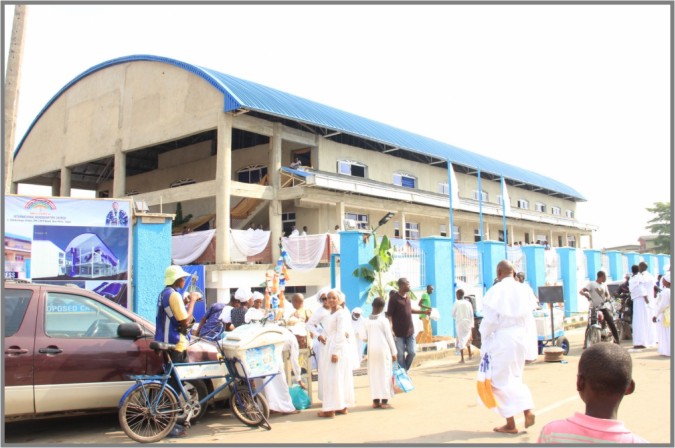 Anyone who is familiar with the Celestial Church of Christ International Headquarters in Lagos would know that the church a very strong history and plays a vital role in the general growth of the CCC worldwide. But that is not the gist for today.

The gist today is that the cathedral is wearing a brand-new look. Starting from the road that leads to the auditorium, one would have easily noticed that things have changed for the better. Before now, the road that leads to the cathedral off CMD road was untarred but that is in the past now. At the 40th adult thanksgiving service, the road is now enjoyable for motorists plying that route.

Did you know that years ago, the church would have lost the land where its international headquarters is seated today? Yes, it would have. It took the intervention of one of the strong members of the church to repel landowners who were bent on reselling the land that had been initially sold to the church through the late Rev. SBJ Oshoffa, the founder of CCC worldwide.

Let’s us tell you that there are three blocks of three-storey buildings that are seated on the CCC International Headquarters expanse of land apart from the land of mercy which is strategically located at the back of the main auditorium. The building committee while explaining to the congregation revealed that the church will become a sight to behold by the time the project is fully completed. The first three-storey building is the main cathedral which will eventually have a few more additions by the time the already captivating and well planed facility meant to service humanity. As planned, an elevator will be fixed at the entrance to ease congregants off the tension of climbing stairs day-in, day-out. Members of the CCC International Headquarters can now take full advantage of the facility.

The second three-storey is situated just beside the main auditorium and it also has facilities that will be fully utilized. It has an attached hall facility for events such as naming ceremony, wedding ceremony or birthdays on the ground floor. The facilities include Shepherd’s lodge of three-bedroom apartment and office, pastor’s chalet of another three-bedroom in the middle floor while on the third floor is situated another hall, solely for church activities such as meetings for a large group of people.

The third three-storey building is situated just behind the second and is well occupied on the land as well. The proposed project reveals that this property is expected to house the church’s water and candle factory.

Did we tell you that CCC International Headquarters is set to commence a candle and bottled water factory that will serve as the community and also provide job opportunities for the teeming youths of Ketu axis in Lagos?

The church which is pastored by Superior Evangelist Matthew Olatosho Oshoffa made the pronunciation at its 40th Adult Thanksgiving Service in Lagos. CCC International Headquarters announced this as a way of assisting the government in creating employment opportunities for the teeming youths in the Ikosi Ketu axis of Lagos. Sup/Evang. Tosho further reiterated the church’s commitments towards community development by engaging the youths and getting them busy positively in other to reduce crime and social vices in the society.

READ ALSO: HOW YOUR NAME CAN DESTROY YOUR DESTINY – MFM PASTOR, D.K. OLUKOYA