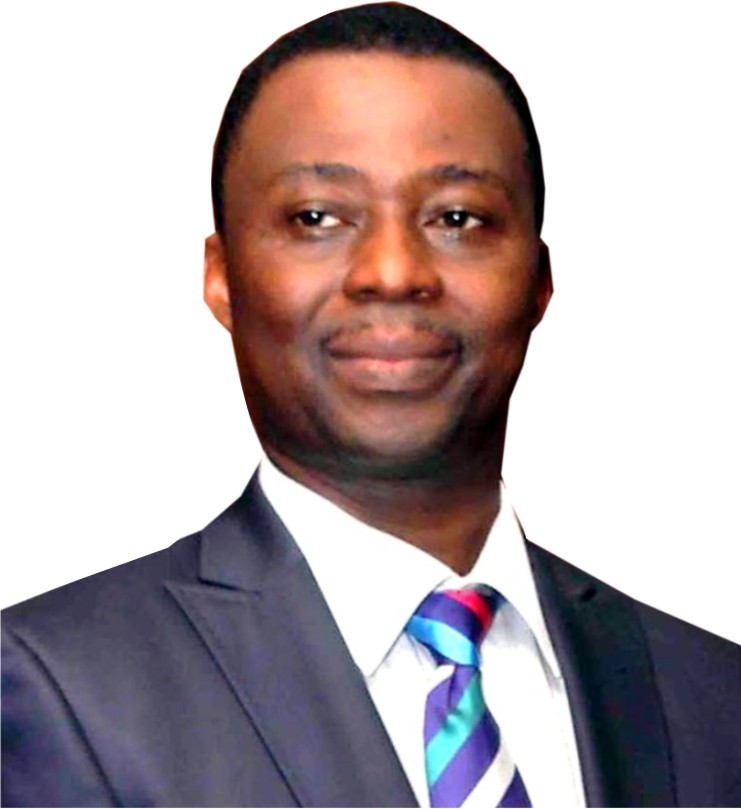 Pastor Daniel Olukoya is the General Overseer of Mountain of Fire and Miracle Ministries Worldwide. He is a great teacher and author anointed by God with an uncommon gift and fine expression as a prophet, evangelist and preacher of the word of God. His messages and biblical teachings are thoroughly expressed with the backing of the Bible. One of such was when he delivered a powerful sermon at his weekly services on the anatomy of names. He explained how one’s name can either destroy or help one fulfill destiny. He spoke greatly about how our names could affect our life in its totality.

At one of the Sunday and Wednesday  services with the topic, Your Name and Your Destiny, when your names fight you, he says backing it up with a quote from Dan. 1:6-7.” There is a great significance between your name and your destiny. God is interested in the name you bear because name affects your destiny in a very long way. Your name is your identity. We have 2 types of names 1. Physical name, 2. Spiritual name. There are consequences of Evil spiritual/physical names: It brings slow progress, evil family pattern, demonic attack, constant nightmare, curses, incomplete deliverance, it acts against your prayers. In our African society today, so many names are attached to deity. The solution is to carefully make research of the meaning of your name. Find out the meaning of your family (surname). Find out the history of your name, cry out unto the Lord for forgiveness, Change the name(s), You need to cancel every effect of that name in your life. Pray aggressively and targeted prayers. Genesis 32:26-27.

Name is important to GOD and Satan. Example is “Thou shall call his name Jesus, because he shall deliver his people”

Names can say wrong prophecy, In GOD’s own view, some people’s name will stop them from fulfilling their destinies. Some can be heartless; are you here today and you bear a name of the days of the week or market name means you have devoted the business market to Idols.

If you name your child after a dead relative, it means that the challenges that the dead relative faced will be faced by the baby. In Yoruba language, the Yoruba use to say “Oloopade”, Oloopade means the idol behind the staff has arrived. Job means suffering and affliction.

All tragedies of human experience is owing to ignorance. Like I use to say ‘Ignorance is the greatest enemy of man, every man’s mountain is the mountain of his ignorance’.

Beloved, ignorance is at the root of most of our problems. Many of us don’t really know what the problems are, so we don’t know who the enemy is. Fear is a product of ignorance. Ignorance is the father of heartless destruction.

Listen carefully beloved, when you are at the university of ignorance, it will control you. It will push you here and there because you really don’t know what to do.

Experimentation is an admission of ignorance. When you continue to experiment, and you are looking for information and you don’t know something. It is a tragedy to be ignorant of your own ignorance. Knowledge is not wisdom, being smart is not wisdom. There are many people who are very smart, but they are not wise. Education too does not bring wisdom. A person can spend the whole of his life learning all the negative and the wrong things that his destiny does not need.

Ignorance is never out of style, ‘it was a fashion yesterday, it is the rage of today and it will certainly set a pace tomorrow’. Beloved, the truth is this, spiritual ignorance will completely mess you up! All tragedies of human experience are owing to ignorance. Ignorance is lack of knowledge and that ignorance is the creator of all other obstacles. Ignorance they say, ‘is the night of the mind’; that is, the mind is in darkness.

Beloved, as a matter of fact; there is no slavery but ignorance. An ignorant friend is a dangerous companion. The recipe for constant ignorance is to be satisfied with your own opinion and content with your own knowledge; it is believing you know everything, and nobody knows anything. Therefore beloved, the mother of all siblings is ignorance

I said all these so that you will be able to understand the importance of what we are talking about today; ‘Anatomy of Names.

Names are important to God; names are also important to Satan. Names are also important to people and whether you believe it or not; there are spirits behind names. Names have to do with destiny. A wrong name can destroy a life or destiny. It is not in vain that the angel said ‘thou shall call His name Jesus’. Jacob was blessed by changing his name from Jacob to Israel. Names then, can establish a curse. Names beloved, whether you like it or not or you believe it or not; they are prophetic proclamations. A name speaks of one’s assignment on earth. Perhaps you are not fulfilling your assignment now because the name you bear is opposite the assignment you have been given. I met a brother who said his name meant darkness. How can him be named darkness? A name speaks of character, A name can bring a curse or a blessing. A name can bring death and affliction. Beloved, a name can fight your destiny. Your name could be the lawyer you have hired to fight your destiny. A name can withhold your blessings. Names are very significant and important. Names have meanings, even if you don’t know the meaning; they have meanings. Names influence the lives of people. Names affect the destinies of people. An evil name, will bring evil manifestations to your life. Names are so serious that God Himself gives people names to enable them to fulfil their destinies. If the wisdom of God gives people names to enable them to fulfill their destinies, then we know that the major problem that we have on earth is those names we carry.

Names can release operations of God’s covenants and blessing into a life. If not, God will not be so interested in changing your names. There is a spirit behind names, it sets the tones for a person’s life. Names have dedicating and covenanting power. When people call you your name, they try to get your attention. After everything that Jesus did: He came to the earth – He suffered, He went to the cross – He suffered, He was buried. God didn’t give Him a land or property, God did not give Him a business; but God gave Him a name. There is power in names. God told Abraham that He will make his name great.

God classified affliction with names sometimes, so people’s names matter. Your name is your identity and you want that identity to be right. It is well known that people’s names are very important in scripture. I will be repeating many things in this teaching for the sake of emphasis.

Names are very important in scripture. So when Adam called his wife Eve, it is significant.

When Hosea’s wayward wife bears a son and the Lord chose to name him Lo-ammi meaning ‘not my people’, a hard-wrenching point was being made.

Names are symbolic, names represent the essence of the individual. The essence of that individual was captured in that name. When God created Adam, He gave him that name because it means ‘man’. Eve was created, her name means ‘mother of all living’.

God brought the animals to Adam and asked Adam to give them names. Adam was the one who named them all. I’m sure the names Adam gave to them must have had something to do with the characteristics of the creatures. Jacob was named that name because he took his brother by heel. Jacob literally mean ‘heel hatcher’. His brother Esau, was so red and hairy.

Judah means prince. Samuel means of ‘asked of God’. By the way, have your parent named you Samuel? Then, don’t try to run away from God, you are already divinely dedicated. Any attempt to run away will mean a closure of your destiny.

Jacob became another person entirely after he had fought and wrestled with that angel.gen 32:28.Beloved, names are highly significant and important

When a man’s negative experience aligns with the interpretation of his name, then that name is not correct. Bearing a cursed name can spell disaster on even born again Christians, so you need to check your name beloved. Does it implies evil? That your surname that you are so proud about, what is the meaning of your surname? You say you don’t know, it is not good enough for you not to know the meaning. Does the name aligns itself with unpleasant experiences of life? Is the name dedicated to local gods and idols? Does your name have anything to do with market days, particular trees, animals, rivers, notable ancestors, idol worship, familiar spirit, reincarnations, witchcraft practices or bad family history?

Does your name have relationships with all these things? This is a very serious matter.

When a believer, a Christian; bears a names that suggests evil, misfortune or ruin; he or she does a lot of harm by retaining such names because when that name is called in the spirit realm; it brings an evil oil upon it. It is also not good to have a combination of good Christian names and then, demonic surnames in addition. These are serious issues that the enemy has been using as a serious ladder to destroy so many destinies.

Because names can authorise particular demons to exercise power over them and their offspring(s) and their circumstances and their work and their progress and what they are standing for; other problems in these areas are these: Names given under sad parental experiences, Names given before idol or in front of the shrine, Names given by witch doctors, by magicians, sorcerers and diviners.

Beloved, if you don’t know the meaning of the names you bear, the demons know the meaning and satan and his agents will work tirelessly to execute the curse on a such a person. Jeremiah 46:17.

What are you going to do now? There are steps to take: Do not hang on to a bad name because you desire to retain your family heritage, If you have a name that does not glorify God, drop that name and pick a new one, Drop the spiritual principles by which the former name operated to reduce evil experiences, Bring it to force the blessings you actually expect.

There is a book written many years back, called ‘prayer rain’. In prayer rain, there is a section for you to pray; if you will like to change your names. So this is a multi-facet matter. There are natural names that trouble people, there are spiritual names that trouble people. Some of these names are known, some of these names are unknown. Before you can take all these steps, You need to surrender your life to Jesus.

How Your Name Can Destroy Your Destiny – MFM Pastor, D.K. OLUKOYA was last modified: November 23rd, 2020 by Tayo Oyediji