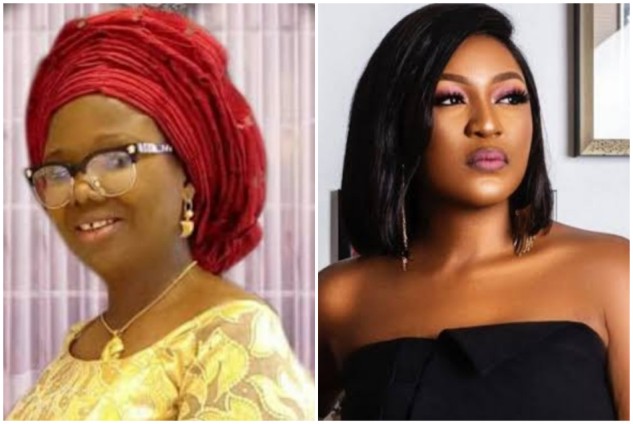 A maxim says: “What a man can do, a woman can do better”. That is what explains the exact qualities and attributes these great women from Kogi State possess. They are strong and influential women, who have become pacesetters and have set examples for others to follow.

They are all beautiful and command huge respect in the society. They excell where some men even failed and they are no push over as they lead in their different endeavours. They earned  people’s respect in Kogi and in the larger society, not just because of their achievements, but also because of the positive impact they have made on people’s lives one way or the other. Gone are the days when women are relegated to the background. Not anymore. These great women have changed the narrative and because of their successes and achievements they are now respected voices to speak in the society.

They are regarded as the pride of Kogi State. City People’s BIODUN ALAO, brings you 50 prominent women from Kogi State.

Natasha Akpoti: The very pretty Natasha is a barrister, social entrepreneur and politician. She ran for the Kogi Central Senatorial District seat under the aegies of Social Democratic Party in 2019. She was also an aspirant in the Kogi State governorship election, which held on 16th November, 2019. Today, she is the strongest female politician in Kogi State and she has made impact on lives of many people. You can’t even talk about strong female poiticians in Nigeria and Natasha’s name would not top it. She is beautiful, fearless, and highly intelligent, popularly called the woman of steel. This pretty and young politician is one lady many Kogites are hopefully awaiting to emerge Governor of the state very soon.

Dr. Ramatu Tijani Aliyu is another beautiful politician from Kogi State. She is currently the Minister of State Federal Capital Territory. She was once  the National Women Leader of All Nigeria People’s Party (ANPP), and later All Progressives’ Congress (APC).

She had always supported President Muhammadu Buhari’s presidential ambition till he emerged President.

Dr. Ayoade Folashade Arike: Delectable Dr. Ayoade was, until her appointed as Secretary to the Kogi State Government, a Deputy Director in the Chemical Evaluation and Research Directorate of the National Agency for Food and Drug Administration and Control (NAFDAC). She began her career as a Regulatory Officer and later rose to the rank of a Chief Regulatory Officer in NAFDAC.

Prof. Marietu Tenuche: She is currently the VC of Kogi State University, Ayangba. She joined the service of the Kogi State University in 2000 as a Lecturer and rose to become a Professor of Political Science in 2011, until her appointment. She was the Dean School of Post Graduate and Chairman of the Committee of Deans and Directors.

Hajia Amina Bello. The beautiful Amina Bello is the first wife of Kogi State Governor, Yaya Bello. She is a laywer and Philanthropist. She is the founder of Hayat Foundation, a business woman and a philanthropist.

Emily Alemika: She is the first Professor of Law in Kogi State, the very first woman from Kogi to become a law professor. She was a victim of Child Labour and by the age of 13, she had lived with about 12 employers across 33 villages in Bunu Territory. Owing to her experience, she is very passionate about human rights. She encourages and mentors many.

Prof. Angela Okatahi. She is a professor of educational pscychology from the prestigious University of Abuja in 2006, within the space of her 40 years in the University, she had produced 54 post graduate graduates and mentored a number of people, some are now professors and senior administrators in various institutions in Nigeria and abroad.

Sefi Atta: She is an award-winning author, playwright and scriptwriter. Her books have been translated into many languages, radio plays have been broadcast by the BBC and her plays have been performed on. International stages. Her father was the head of Civil Service untill his death in 1972.

Oyiza Adaba: She is a highly celebrated media personality. Her mother was an Administrative Officer in Nigeria National Broadcast Television Station and her father was one of Nigeria’s most successful TV personalities and later head of the National Broadcasting Commission (NBC).

She worked with the satellite television network, Multichoice in Marketing and Public Relations. She held the position as DSTV Sales coordinator, helping to pioneer a new wave of  TV in Nigeria. She currently produce a human right interest on AIT and also write and contribute to various online magazines.

Dr. Itodo Grace Eleojo: She is rated one among the world’s 500 most influential experts in Medical Laboratory Science on Earth, and also celebrated for her outstanding scientific contributions to the society. She is the Assistant Director Medical Laboratory Service Federal Medical Centre, Lokoja.

Hassana and Husiena Edili Ogaji: They are the first female twin pilots who are from Igala in Kogi State, they have both worked with different aviation companies, flight dispatchers, maintenance engineers and others to successfully achieve a safe and effective aviation industry.

The Aliu sisters: their story went viral a few months ago. All the five sisters are all medical doctors from Okene in Kogi State. The eldest, Salamt Ahuoiza Aliu, is the first female Neuro Surgeon in Nigeria and also the first female to be certified a Neuro Surgon in West Africa and since she got certified, she has also mentored other women who were also trained as Neuro Surgeons. Her other sisters are: Halima Aliu a Plastic Surgeon. Raliat Aliu an obstetrician and Gynaecologist.

Khadijat Aliu is a female physician and Medinah Aliu a health physician. These five Aliu sisters have been earning admiration from many people all over the country. Because it is, indeed, a thing of pride for 5 siblings to all be successful doctors. They are a beacon of hope to women and a reference point for the importance of a girl child education in Nigeria in particular and Africa in general.

Lola Alao: The veteran Actress is, no doubt, among the women doing the state really proud. She joined the movie industry in the 80’s, featuring in English movies and series before featuring in Yoruba movies. She has bagged several awards home and abroad for her remarkable contributions in the movie industry, and despite relocating abroad, she is still featuring in movies at home.

Jumai Joseph: the delectable actress is also among the stars that dominate our screen in the 90’s. She can easily pass for Lola Alao’s twin sister, as both look so much alike. She is from the Igala speaking part of Kogi State. As far the movie industry is concerned, this very beautiful lady is among the veterans mentoring younger stars to shine.

Rekiya Yusuf is an actress, Presenter, host and Voice Over artist. A graduate of Microbiology from Kogi State University. She has featured in many movies and series and now among the wave-making stars in the industry.

Mercy Johnson is a multiple award-winning screen diva and a highly celebrated super star. She is rated among the best in the industry and one of the most followed actresses on social media. She is highly talented and has remained a role model to many young movie stars in the industry.

Halima Abubakar is not just a talented super star, but also a business guru. She is among the highly talented stars making Kogi State proud, most especially with her philanthropist gestures. She has positively touched a lot of lives and many look up to her as a role model.

Esther Audu, the very calm, humble and beautiful Esther is from the Igala-speaking part of Kogi State. Besides being an actress, she is also a Producer and the CEO of Shirtfreak, a successful brand she runs with her husband.

Yetunde Barnabas is an actress, model, producer and Miss Tourism Nigeria 2020. She came to prominence after acting Miss Pepeye in Wale Adenuga’s production. She has featured and produced a good number of movies.

Nany Naomi Ameh is a young and very talented actress. Many will never forget her role in the epic movie legend of “Inikpi”, among several others.

Ajanigo Simon hails from the Igala-speaking part of Kogi State. Her role interpretations in movies are always close to perfection and this explains why she is loved by many.

Oluwatoyin Oki hails from Ogidi Ela in Kogi State. A graduate of English language Abu Zaria. She started acting in 2007 and has featured in a good number of movies and series.

Racheal Oyiza Ugorji is another beautiful wave-making actress, who has featured in a good number of movies before relocating to Canada a few years ago. Despite working in Canada in the health sector, she has not put her career on hold. She still produces and features in different movies and series.

Achenyo Idachaba Obaro is a Computer Scientist turned social entrepreneur. She is also the founder and CEO of Mitimeth, an award-winning social enterprise transforming waste and building livelihoods, through the transformation of invasive acquatic weeds and agricultural residues. Her company has trained over 400 women from communities across Nigeria and Ghana to make eco-friendly home decor and lifestyle products from these natural fibres. She is very passionate about creating employment opportunities and her stay has been featured on BBC, CNN’s African start up among others.

Zainab Suleiman is the first Nigerian young woman to be conferred with the award “Doctor of Science in Child Developmental Science”. She is 29 yrs old and hails from Olamabiro Local Government Area of Kogi State.

Engineer Oguche Joan is the second Chairman APWEN, Kogi State chapter (The Association of Professional Women Engineers of Nigeria). A non-profit, non-governmental educational service organisation and a division of Nigeria society of Engineers.

Martha Moses, who hails from Ojoku in Ankpa local government area of Kogi State, is the first female Vice Chairman in Ankpa Local government, breaking the state records. Funke Ayodele is an outstanding celebrity fashion designer, who deals strictly within the circle of the  high and mighty in the society, most especially those located in Abuja. She dines and wines with the big wigs in the society.

Rahama Hassan is a popular Kannywood actress. She came to limelight with a lead role in the movie “Rudin Zamani” and fondly popular for her roles in movies such as “Qudsiyya, Yanuwa, Wasan Maza among others.

Ufedo Sunshine is a very talented actress-cum-filmmaker. She owns and runs her fashion house ‘Bemztouch” in Lagos.

Halima Muhammed popularly known as Hally Black is an actress from Kogi State, an Ebira by birth. Currently, she is based in Asaba. She has featured in movies such as Wicked Heart, Fire of Love, The Engagement, The Nurse among so many others.

Mercy Salma Aminu is another beautiful screen diva, who, no doubt, has contributed her quota to the movie industry. She is an actress-cum-producer and often produces for multichoice. She is also happily married to a popular movie star and they are based in Abuja and still very active in the entertainment industry.

Agnes Oziwere Ojeba Abiodun is a former member of the Kogi House of Assembly and a major Stakeholder in PDP in the state. She is a strong force to reckon with in PDP.

Ajifa Atuluku better known as Ajay, is one face on Television that is becoming a darling of many because of her infections smiles. This graduate of Mass Communication has been on TV for 3 years from the defunct HipTV to TVC. She is a show presenter and producer for TVC.

Folashade Yemi Esan is a Nigerian Civil Servant and the current head of the Civil Service of the federation since 28 February 2020. She hails from Ijumu in Kogi State.

READ ALSO: WHAT LASG SHOULD DO TO STOP BUILDING COLLAPSE

Why Those Opposing TINUBU Now Will Return To Him – LAGOS Lawmaker, Hon. MOJISOLA MERANDA

SEGUN AWOLOWO Opens Up About His Mum,...