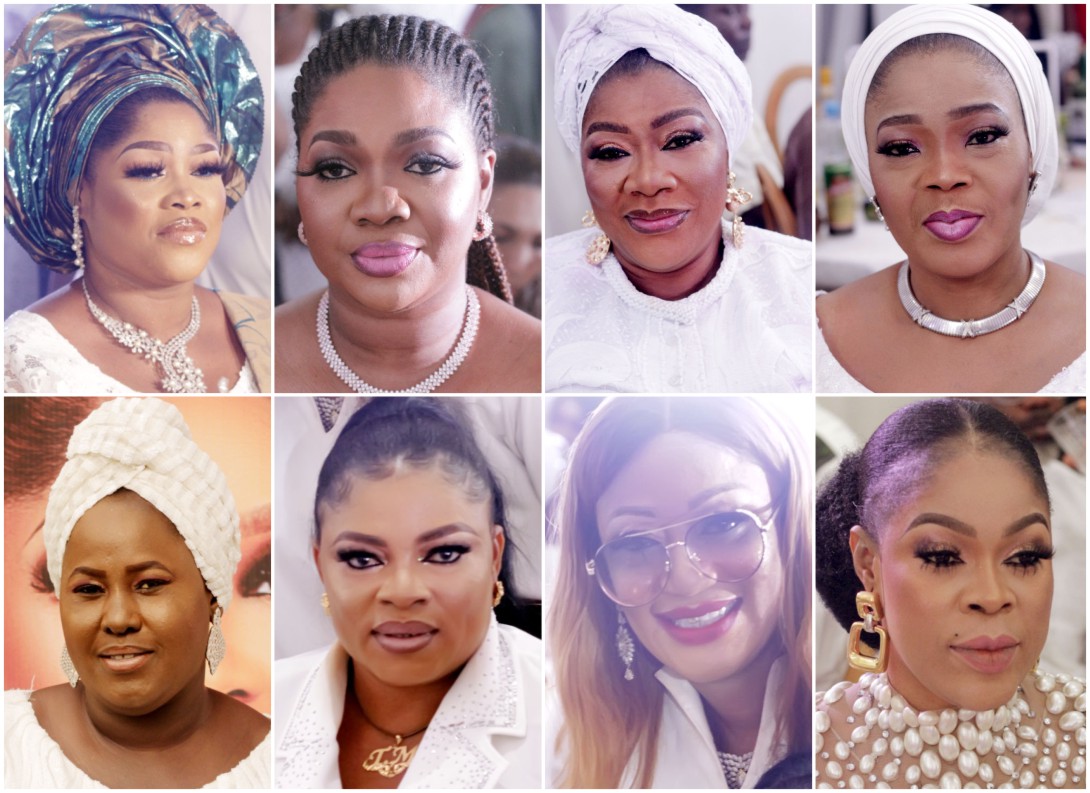 The colourful event with the hashtag #bio45ed trended on many social media platforms. The well-organised party was put together by London based music promoter, Dupe BnS.

Gaining entrance into the well-decorated hall was strictly by access card. The celebrant’s pictures lit up the whole entrance of the hall which added a lot of beauty to the outcome of the decorations. Kudos to the decorator of the hall who transformed the place into snow white. She did this with the white drapes, white balloons and sparkling lights, which gave it a heavenly look.

The stage décor also had her pictures all around it to beautify the space. The beautiful cake was a designer cake made in a replica of one of the best designers in the world, Coco Chanel as the celebrant is one of the lovers of the brand.

The banquet settings were all in white with petals adorned and all tables were tagged for all the important guests for easy identification. Who was behind this décor, it’s no other than Tugbogbo Adesewa of ladysandecor. She outdid herself. The table setting was done by Jokspepperkonsult, furniture was by Lavish Eventshire and Iorrentals, lighting and screen by Innovate Media.

Popular Mc, Soji Omotayo anchored the event while popular Abeokuta based Singer, Alayo Melody Singer was on the bandstand.

There was a surplus of foods and drinks from many professional vendors who made sure guests were all served and satisfied. All other finger foods were also served duly. Kate of 1229 foods was in charge of chops. Thumbs up to popular Lagos caterers Celebration Foods and wave-making caterer in Abeokuta, Halaga Caterers who handled the whole menu.

Exotic drinks and cognacs were also not in short supply as many had a field day with their choice of drinks. Traditional palm wine servers were also present handled by Emuoguro.

Give it up to the top event planner, Dodaevents, she made sure it was a hitch-free event.

For Bisi, it was her best day, she glowed in all her attires. For someone who has been in the business of fashion for over 6 years, she put up a good one with all 3 outfits for her day. She dazzled endlessly and stole her own show. She looked so well put together and one thing you will notice about her, is her smile, she is indeed beautiful.

For her day, Bisi rocked 3 outfits, her first outfit was a white native attire from Thefabricroom which she paired with the HOH 3D grand Swiss gele from Jhummy Exclusive. Her make up was handled by Tshakky, her gele was tied by abydouzgele, Lawiza creations designed the outfit, her shoes and purse were from larrittshoe village, jewellery from studs pieces while rare magic gallery handled the photography. She opted for a lovely white dress for her second look while it was an all sequined nude colour dress for her after-party.

The celebrant was honoured by many celebrities who all came out to share in her joy. Her parents, Mr Yomi and Mrs Caroline Kikelomo Ibidapo Obe alongside her siblings and daughter all looked good and celebrated her on her day.

On this list is popular businesswoman, Radeke Kupoluyi, the CEO of Radek Boutique. She opted for a lovely all stoned chiffon top and trouser and paired with an 18karat gold earrings and bangles, so also is the CEO of So pretty kids store in Ikeja, Priscillia Giwa, she dazzled in a long flowing all beaded white dress with her choice of ponytail hair which stood her out. We also spotted Ireti Odulaja, who deals in jewellery. Another celebrity babe is Gbemi Ariyibi Oke, what of Ronke Okoro of RM Collections, she looked good too. The brain behind Motties Foods, Motunde Dosunmu is also not left out. She looked great in her white chiffon outfit. US big babe, Yvonne stormed Lagos for Bisi Ibidapo Obe. She was dressed in a lovely lacy top paired with a white Jean. Radeke Kupoluyi’s sister, Bimpe Alade was also at the party looking nice. Popular TV show host, Bisi Ipinlese talkshow dazzled in a white attire matched with a statement hair fascinator,  what of Dupe BnS? The UK promoter is a friend of many Showbiz stars. She stormed the party in a lovely white dress that accentuated her plum stature. Her all stoned shoes spoke volume. Sighted at the party was a popular shoe merchant in Lagos, Lara of Larritt shoes, she also looked nice in her lacy outfit. To celebrate with Bisi was Mrs Funke Akinyera of strictly brides, the pretty wife of Lagos socialite, Tunde Akinyera also wore the all-white code but she looked great in her burst and touch of gold colour outfit. One of the Shogunros sisters, Toyin Shogunro of Style network was also spotted but not wearing the white colour code. She opted for a multi-coloured outfit.

Star actress, Fathia Balogun is one of the close confidants of Bisi and her older friend, though she did not wear the white colour code but she looked good in her black lacy dress. Island big babe, Folashade Ben Cash looked gorgeous in her organized inspired outfit. Shoe merchant, Tai Elemosho Okesanjo popularly called Montai was also there. She also dressed well.

Glo big babe, Tope Adegbite who had her 50th birthday about 2 weeks ago in Lekki was also spotted. She wore a beautiful white dress. The pretty wife of real estate guru, Chief Mrs Ayo Lawal looked good in her choice of white French lace. Another older friend of the celebrant is Ronke Ajanaku, she really looked good in her white top and trouser. Professional vendors, Kate of 1229 foods, Sholafish, Fola of Celeb Foods were all not left out. Adeosun Muibat, Bolaji Balogun, event planner, Tripple adorable, korad closet CEO, Oloto, house of Phreedah body CEO, Farida was also one of the stunners of the day. The Vice-Chairman of Oshodi Isolo local government, Modupe Badmus Aregbe honoured Bisi. She glowed in an all-white dress. The CEO of maknray signature in Lekki was also there.

Bisi Ibidapo-Obe was born on January 27th, 1977 in Surulere, Lagos, the actress hails from Ondo State. She had her primary and secondary education in Lagos. She was introduced into the acting industry by late actress Bimpe Adekola. Her first movie was ‘Edunjobi’ but it was ‘Bisi Omologbalogba’ that shot her into the limelight. She started producing movies in 2014 and has about three movies to her name; Oyin Ade, Omo Jesu, and Igboran San.

She has a daughter, Destiny Anjolaoluwa Okiki Oluwajomiloju, with Senator Dino Melaye. On May 18th, 2015, the actress formally launched her adult store, BIO Couture in Magodo, Lagos, where she deals in luxury bling outfits.

Many Things You Don’t Know About BISI IBIDAPO OBE