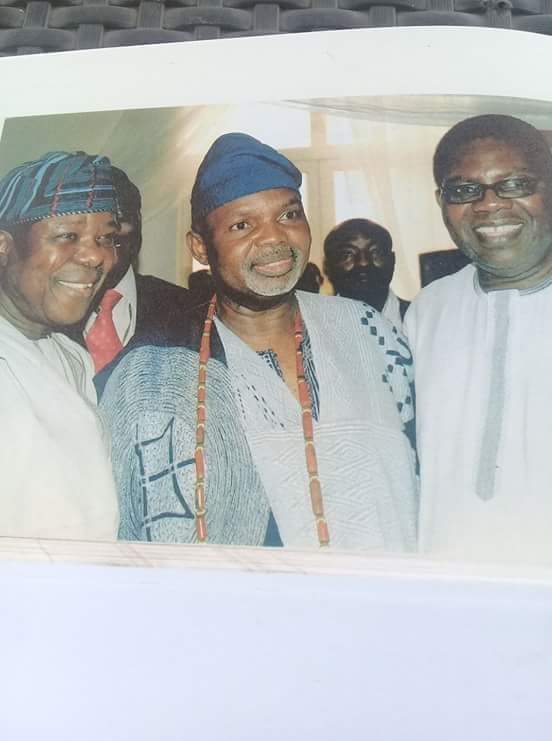 Evangelist(Professor)Ebenezer Obey-Fabiyi, MFR, is 77 years old today. I join millions of the fans all over the wish him a happy birthday many happy returns of the day.

When Obey emerged on the music radar in the 1960s,
I struck a hero-fan relationship with Obey and his International Brothers Band, since changed and now known as the Inter-Reformers Band, by listening to his philosophical records, when my dear father, the late Pa AbdulRaheem Oladosu Alabi, alias, “Right Time”, bought me a Panasonic transistor radio set in 1963.

My interest and association with Chief Commander Obey grew in leaps and bounds,as I was a regular attendee of the weekly (Wednesdays)popular dance programme, in the , of the Western Nigeria Television(WNTV), Ibadan,commissioned on 31st October,1959,by the then Premier of Western Nigeria,Chief Obafemi Awolowo. Obey and his band featured regularly on the WNTV dance programme.

The programme, “Come, let’s Dance”, was compared by the queen-of-the-tube-turned-lawyer, the late Toun Adeyemi. May her kind soul continue to rest in perfect peace. Amen.

Sometime in 1970, I attended a party at Isalegangan, on Lagos Island, where Obey’s International Brothers Band played with Ayinde Bakare’s Inner Circle Orchestra and one other band. The party was hosted in of the mother of Pa Oyenuga, a close friend of the late Pa Daniel OreyomiAdesina, popularly known as Oriade Wellington.

I was invited to the Isalegangan, Lagos party by Kola Oyenuga and Tunji and Deji Wellington.

At that party, I was the young(1 was 19+ years old then) fantastic dancer/translator of the many idioms churned out by the International Brothers Band’s ace talking drummer, Mutiu Jimoh ‘Kekere’, alias “Hajji Mutato”.

The public admiration and the heavy naira ‘rain’, (currency spraying) on me and my very attractive(lady) dancing partner at that party made me become a notable fan of Obey and his band, such that I attracted free and mentions (actually praises) whenever I attended the band’s live performances till date. Personal friendships also developed between me and key band members such as former lead vocalist Bode Akiwowo (my wife’s classmate at Comprehensive High School, Ayetoro, Ogun State), set drummer Sunny Fadugba,the late ‘Captain’ Samson Ogunlade,late guitarist Abiodun Koleosho and co-vocalist Giwa Ojo ‘Arigidi’,who died recently.

By 1974,when I had become the social page editor of the popular Sunday Sketch weekly, thanks to a late editor of the newspaper   Philip Bamidele Adedeji,I had developed an ‘–‘(older/younger bother)relationship with Chief Commander Obey,to the cordial level of his band playing, pro bono, at my 40th birthday(1990) and 60th birthday(2010) parties in my dear hometown Ibadan,Oyo State of Nigeria.

I have written and spoken volumes about Chief Commander Obey’s piety, loyalty, industry, talent, evergreen compositions, humility, dapper, acumen . I,however,particularly recommend my article/tribute to Obey(My column in the Sunday Sketch “It’s What’s Happening by ‘Lekan Alabi” edition of 30th December 1974, “Obey the Ali In You” in the Comet on Sunday newspaper issue of Sunday,21st April,2002 and five of my books)
Again, I sincerely wish the gentleman/composer/evangelist/big brother and friend, Chief Commander Ebenezer Obey-Fabiyi, MFR, a happy 77th birthday. Long and happy may you live, Sir. Amen.

I remain, Sir, your dear Akogun, as you prefer to call me till date.