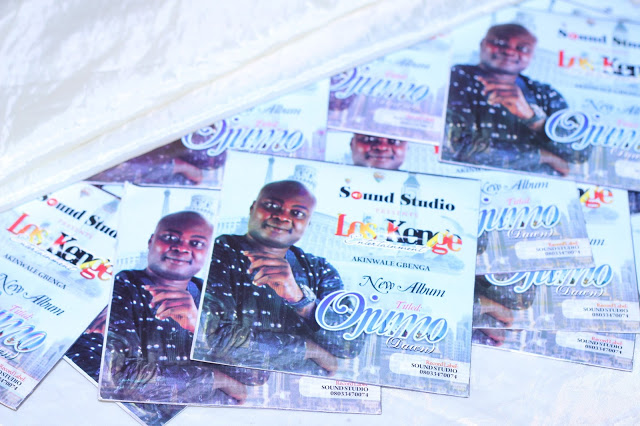 -Talks About His Music Career

All over Abeokuta, everyone calls him LOS KENGE. But his real name is Oluwagbemiga Titilayo Akinwale He is a veteran musician based in Abeokuta, Ogun State. He is the one who taught popular musician, St Janet, how to sing. Many other music acts have passed through him. He was born into a missionary house and he attended an Anglican Primary School at Oke-Bola, Ibadan, Oyo State. His father was later transferred to Ake, Abeokuta and he continued at a primary school there before he moved to Abeokuta grammar school and he studied Mass Communication at Moshood Abiola Polytechnic. He is popular in Abeokuta and has done so much for himself in the industry. Recently, GBOLAHAN ADETAYO, interviewed Los Kenge and he told us his story. Two weekends back he launched his new album OJUMO (Dawn) that has 6 tracks in it.

I started when I was young because I am a pastor’s son at St John Anclican Church, Igbeyin, Abeokuta and I attended Abeokuta Grammar School, I was in Science class, but because we have all the music equipments on our premises and whenever we were having morning devotion, I  used to play them. I also played piano at music room in my school and after I graduated, I had interest in music more than I had in any other profession. That was how I started by playing with some bands such as Baba Ara, Femi Dabira, Funmi Aragbaye and others as a keyboardist. When my sister was having her wedding, a musician disappointed us and I summoned the courage to set the hall, the church’s musical instruments and I started singing, people appreciated it and that was all.

How did you now make it a profession?

As at then, I had much time for music, I have some brothers called Segun Onitide, Wale Sosan and others, who took me to Falcon Club in Abeokuta to be performing for free before it became an income-generating effort. People really accepted my music and I decided to make it my job. I have produced several albums and I have one coming up soon. I did S’aye yi Nani o, Shalalilala la were my songs, but I don’t want to talk about it because Janet has rebranded them. The coming one is entitled Loru Ana Moju.

How can you describe your kind of music?

I play blues, reggae, jazz and the other genres because I am gifted with music because I play instruments also. There is no kind of music that I can’t play, but I am fully into gospel music now.

How did you meet St Janet?

She was introduced to me by a friend of mine. He brought her to me some years ago around 1:30am at SK Hotel in Sagamu and I gave her a chance to perform and I fell in love with her voice when she was giving chorus. The person who brought her is Segun Alawaye, who is also a musician. We both used to hold shows at the same hotel, Janet liked my band and she followed us rather than following the person who brought her to me. So the guy thought I hypnotised her. My manager told me that the lady who chorused for us yesterday had been sent away from Segun’s stage, I told her to sit because I can’t really pick her face as at then.

When we finished, I went to Segun to apologise on her behalf, only for me to get there and I was slapped and also accused of  snatching her. Later, when he realised that she didn’t follow me to the show, he apologised. Janet started crying that she wanted to follow me to my house and I told her that I was a married man. She was adamant on following me because the guy who brought her had started misbehaving, that was how I took her to my house to be living with us. She was with us for 6 to 7years in Abeokuta. At one stage, she started making money and she rented her own apartment. That was before the death of my wife because that was the person who accommodated her. She came to Lagos and she is today everywhere.

How did you feel when you were slapped because of a lady you didn’t know?

I felt so bad, but I didn’t let her issue separate me and my friend, who is  my childhood friend. I wanted to retaliate, but people stopped us. I don’t really like trouble.

How was your relationship with her and your wife, while she was squatting with you?

There was no problem because Janet is a free-minded person and that is why I am here today. She opened up to my wife and my wife liked her so much, but unfortunately, she is not alive to witness the success of the lady she accommodated.

What were people saying when she was living with you?

People insinuated that we were dating, but those who were close to me knew that I loved my wife so much.

Were you the one who taught her lewd music as well?

Janet wasn’t interested when I first sang lewd music. I didn’t give her money one day because of her refusal to back me up when I sang lewd lyrics. It was a big surprised when I noticed that she was singing it more than the way I put it in the first place. People called her Omo Kenge, if you worked with me and you later became a star, I would be very happy because I believe that I am still the star that produced a star. I am always happy for her because that is how God has destined her career.

I am a song writer and there is no type of song that I can’t sing. When she released her song, especially when she wanted to go to America, many people called me that they wanted to block her because she used my songs, I was the one, who said no. What if I claimed it and I got to America and start messing up. Thank God for her life today.

Are you still singing?

Very much. I have no other job  other than music. St Janet is more popular than me because God has written it that way. The ways of God are mysterious.