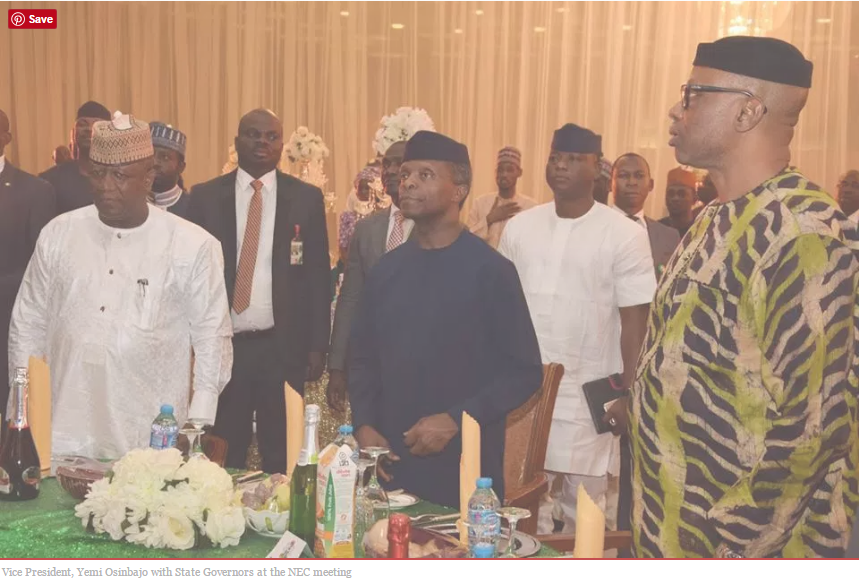 The National Economic Council, NEC, has recommended the implementation of community policing and collaboration between security operatives and intelligence community for prompt response to crimes, especially terrorism.
This is contained in the highlights of the deliberations of its Security Summit last Thursday. The highlights were issued by Laolu Akande, the spokesperson to Vice President Yemi Osinbajo on Sunday.
The summit, presided by the chair of NEC and Mr. Osinbajo, also urged prompt action in the arrest and prosecution of perpetrators of terrorist acts, kidnapping and purveyors of hate speeches.
The presidential directive to the Inspector-General of Police initiating community policing is pursuant to provisions of section 215(3) of the Constitution of the Federal Republic of Nigeria 1999, as amended and section 10(1) of the Police Act Cap. P19, LFN 2004.
He said the retreat highlighted the need for a more effective coordination between the security and intelligence agencies to build a security community that was well synergised.
He said the meeting noted that without the synergy, optimal performance of different security and intelligence agencies might be difficult.
“The retreat discussed concerns about the delay in the entire criminal justice system and NEC members concluded that prompt action by law enforcement agencies was imperative.
“To facilitate this, NEC advocated the designation of special courts through collaboration of judicial and executive arms of the federal and state governments.
“The participants agreed that FG should help states to develop a template on how such special courts would be established, and managed,” he said.
NEC members recognised that the conflict between farmers and herdsmen was essentially a problem of land use, which had however taken an ethnic and religious coloration.
It was agreed that both the FG and states needed to properly define the problems and eschew the ethno-religious construction of what was otherwise an economic challenge.
NEC members stated that it would be useful bringing the different herdsmen and the farmers together to discuss and also work out some of the issues that concern them.
The NEC also criticised hate speech and adopted the directive by the federal government that the issue would be regarded as an act of terror and punished as such.
Mr. Akande added that NEC noted that hate speech was retrogressive and constituted a threat to national unity.
“On the funding of security agencies, NEC agreed that it was key especially with respect to the provision of equipment.
“It, however, noted that defence budget and funding for other security agencies of government always formed some of the biggest component of the budget and called for greater accountability of the budget.
Mr. Akande quoted Mr. Osinbajo thanking members of the Council for their “patience and commitment to this whole process”, saying it was “not surprising at all because every State Government as you know must be primarily concerned with security”.
The retreat also commended the Armed Forces, Police and other uniformed forces for their extraordinary professionalism and dedication to the enforcement of law and order, despite the obvious challenges.
(NAN)