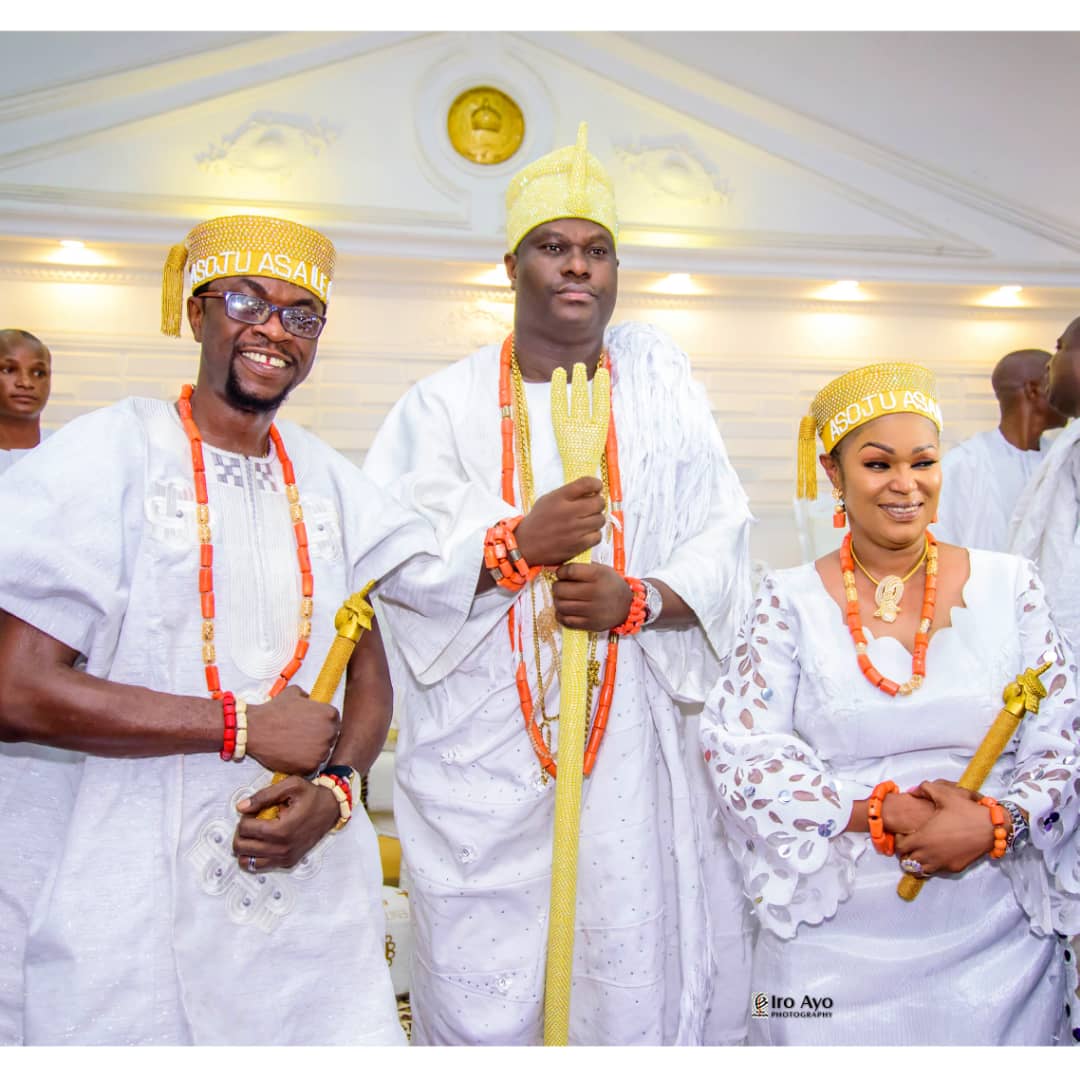 •In Honour Of Their New Roles As YORUBA ‘s Cultural Ambassador

On Sunday, 12th May, 2019, the Management and Staffers of the oldest soft-sell Magazine, City People, played host to two Cultural Ambassadors, Dotun Taylor and Morounranti Ashabi, in a night merriment, to celebrate their appointments, as the Cultural Ambassadors of Yorubaland, at City People Event Centre, situated at Gbagada, Lagos.

You will recollect that on Tuesday, January 16, 2018, the Ooni of Ife, His Imperial Majesty, Kabiesi Adeyeye Babatunde Enitan Ogunwusi honoured popular filmmaker, Dotun Taylor and Morounranti Ashabi Alebiosu by making them Yoruba Cultural Ambassadors. The Ooni made the official announcement at a semi-formal event at Enuwa Palace, enjoined the two honorees to handle the role with the utmost care and protect the integrity that comes along with the office. His imperial majesty also used the occasion to unveil the Yoruba Cultural Festival project. A concept of Roots and Heritage Renaissance Culture Initiative (RHRCI) in partnership with P. S. -100 Limited. It is a social initiative agenda to re-awaken the mind of every true Yoruba person at home and in the diaspora to participate in the agenda.

The vision was to showcase the rich culture and tradition of Yorubaland through the celebration of different aspects on a common platform such as arts, food, clothe, talents etc.

Undoubtedly, when you see the duo, you will know that they are equal to the task. Dotun and Morounranti have been working extensively, showcasing our rich culture and tradition, making sure that our heritage is well managed. With their talents and individual’s skills, they’ve made us proud. Need I remind you that, the duo’s talents and skills actually paved the way for them by showcasing them to the source where they dined with the kings and queens. Morounranti Ashabi is a cultural enthusiast, who served as the Senior Special Assistant to a former Governor of Lagos State on Tourism and Inter – Governmental Relations. She constantly advocates the rich tourism potential in the South Western Part of Nigeria, while Dotun Taylor is a filmmaker, broadcaster, and historian, who runs a regular radio show about Yoruba Culture. He is a voice-over artiste and also the voice of the House of Oduduwa.

It was a blissful night for Dotun and Morounranti, a remarkable one that can’t easily be wiped off their memories, seeing how friends and family members came out en-masse; stormed City People Head office at Gbagada to rejoice with them.

The Publisher of City People Magazine, Dr. Seye Kehinde speaking at the event to welcome the celebrators and the guests said he appreciated everyone who had taken his/her time to be at the event. Dr. Seye Kehinde spoke about how the management of City People found it worthy to celebrate the Cultural Ambassadors, for their remarkable feats in the society, projecting our cultural heritage and tradition.

The event kick-started about 4:30pm. Many dignitaries were already seated; gorgeously dressed, awaiting the celebrators.

Popular filmmaker, broadcaster and voice of the House of Oduduwa, Ambassador Dotun Taylor is one of the celebrators on the faithful day. He needs no much introduction, a man with a distinct baritone voice, who has carved a niche for himself in the entertainment world before his appointment as a Cultural Ambassador stormed City People in grand style. Dotun Taylor was very stylish in his complete white Agbada with a matched touch of gold cap. He came early, and was happy to see some of his close pals he invited, who were already waiting for his arrival. He exchange pleasantries with them and waited outside for the arrival of his colleague, Morounranti.

Not quite long, the cultural enthusiast, Morounranti Ashabi, came in. She was in company of her friends and family members. Her husband walked stoutly behind her. Morounranti looked so gorgeous and beautiful in her white skirt and blouse with a touch of gold. Morounranti’s, beauty made her a cynosure of all eyes on arrival. She joined her colleague, Dotun, for their triumphal entry into the Event Hall, where dignitaries, friends and families were already seated, waiting for them.

In the absence of the official Mc of the day, popular Igi Aruwe crooner, Biyi Samuel, was given the mandate to kick-start the event. It is not only songs that the fashionista and epitome of talent knows how to sing, he equally knows how to anchor event. He was on ground, and in control of the event well before the official MC, Kirikiri, arrived. Biyi Samuel called on one of the guests to give the opening prayer before he invited Prof. Jelili Ojuade for the opening remarks, as he spoke about the town, Ile ife, the two ambassadors and their responsibilities.

GUESS WHO THE CHAIRMAN OFTHE DAY WAS

He is no other person than Aare Akogun Tunji Alapini, a former AIG, and a successful man with many titles. Otun Oluwo Adimula needs little introduction within the Lagos social scene. He didn’t just have a successful career as a Police Officer; he is also one man who socialises very well. He lives well. He dresses well and loves good life. He is 67, but he doesn’t look it a bit. He was on ground on the faithful day as the Chairman of the day.

Hon. Akeem Bamgbola-Secretary of the All Progressives’ Congress (APC) Lagos State Chapter- was also on ground to honour the Ambassadors. He came in company of a friend. He spent quality time at the venue before he left for another appointment.

OMO IGBO TO NK’EWI DID WHAT HE KNOWS BEST

You must have met him one on one or seen him on screen, he is a man with a unique talent, or how best can you describe an Igbo man, who is versed in eulogies in Yoruba language? Chukwuka Jude is an embodiment of talent. The most interesting part at the event was when he was charged to eulogise individual states, which he did excellently well. He also eulogised in his own dialect and gave the meaning in Yoruba.

Veteran and successful actor, Yomi Fash-Lanso, was also at the event to honour Dotun and Morounranti. The handsome- looking actor was given the privilege to speak on the two ambassadors. Being a man of culture and tradition that he is, he applauded Dotun and Morounranti and also charged them to do more in charging the young ones to know much about our culture.

FRIENDS TALK ABOUT DOTUN AND MOROUNRANTI

Many of the celebrators friends were asked to talk about them. Mr. Ola Obitusi was the first person to talk about them. He’s Dotun’s friend. He spoke extensively on their days, while growing up. Mr. Yomi Bosude also spoke about Dotun as a man of integrity and a guru in entertainment world. Mr. Tunde Olaoye spoke on Morounranti Ashabi as a lady with a heart of gold. Dolapo Kuye also applauds the ambassadors for a job well done.

And it was time for Ambassador Dotun Taylor’s response. He reflected on how he started in life, how he started many businesses like Aroba film and Impromptu Vanity, a business that connects people with their favourite actor. He talked about how people often think he sounds like Jimi Sholanke. How he voiced super story montage, and how Ooni of Ife, who has never met him, but loves his voice on radio and probably have seen some of the movies he produced requested him and appointed him a Cultural Ambassador.

One of the side attractions that must not be forgotten is the performance of a young girl popularly called Small Mummy. Small Mummy is a comedian, presenter and an actress. She was called upon to perform by Ambassador Morounranti. As she was invited for her speech, she recognised the little girl’s presence and asked the Mc to give her the microphone. To everybody’s surprises, the little girl performed excellently well.

TEAM DEFINITION DOES WELL TOO

Team definition is a musical group. Their performance was very lovely and actually brought life to the event with their powerful renditions.

In rounding off, Aare Akogun Tunji Alapinni the Chairman of the occasion didn’t plan to talk, but he knew that the two honourees deserved rounds of applause. Aare Alapinni spoke about his relationship with Ooni of Ife and how he made him Otun Oluwo Adimula 11 years ago. He also reflected on how Kabiyesi discussed with him about his interest in appointing the two honourees as Ambassadors. Aare Alapinni prayed for Ambassador Dotun and Ambassador Morounranti and the get together was brought to a close.

READ ALSO: MY WIFE COMES BEFORE MY KIDS AND MY BROTHERS – PETER OKOYE