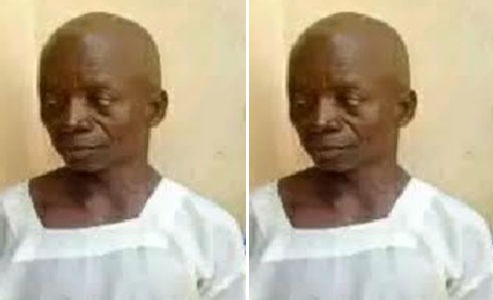 Vanguard gathered that the suspect, who owns a white garment church and currently in police custody, allegedly informed his interrogators that he was tempted by the devil to commit the act.

However, people in the agrarian community, who spoke with Vanguard, are of the opinion that the cleric must have carried out the act “to renew his spiritual power.”

Findings in the town showed that the cleric is popular and his church, located at Oke-Ijebu Street, Odode, Idanre, always records high traffic of miracle-seeking worshippers from far and near on a regular basis.

Sources close to the church revealed that the prophet is a specialist in bathing women in streams to ward off evil spirits and those tormented by spiritual husbands, who prevent them from getting married or having babies.

Reports had it that the prophet lives alone with his daughter after the wife left him years back. It was learned that efforts by the estranged wife to take her daughter along with her were rebuffed by the suspect, who insisted he needed her around to run errands and take care of him in the interim.

A family source hinted that the suspect had refused to remarry after the wife left and had preferred sleeping with his daughter instead. It was unclear if the victim raised any alarm over her defilement by her father, but neighbours said that the girl was always keeping to herself.

Vanguard learned that the victim stopped going to school when signs that she is pregnant was becoming evident. Her school mates, who came to the house to ask after her, were informed by the father that she had travelled to Lagos to continue her studies.

It was gathered from police source that when the victim took in and informed the suspect, he allegedly gave her some concoctions to terminate the pregnancy. The attempt, it was learned, failed.

The suspect, according to a source, contemplated smuggling the victim out of the house to a private clinic, but she refused and threatened to raise alarm. The suspect then instructed the victim to stay indoors to avoid suspicion from church members and their neighbours.

It was revealed that one of the neighbours, who saw the girl with a protruding stomach, raised the alarm. Police laid ambush and arrested the suspect when he returned home.

Detectives informed Vanguard that the only words uttered by the suspect was “it was temptation and the work of the devil.” The church is presently under lock and key, ýwhile other leaders and members of the church have gone underground for fear of arrest. Police spokesperson, Femi Joseph, promised to get the details from the DPO in Idanre, but had not done so at press time. However, police detectives at Ala Police Station in Akure, confirmed that the cleric had been arrested and would soon be prosecuted.