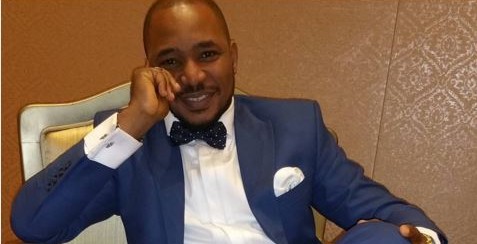 That was just one out of the many big weddings and events that the handsome comedian has emceed over time. He was also in Cape Town, South Africa weeks ago where he anchored former Osun State governor, Prince Olagunsoye Oyinlola’s daughter’s wedding.

Even non celebrities who can afford to pay his fee that runs into several hundreds of thousands now clamour for him to anchor their weddings. Hardly will any weekend pass by without the mutli talented comedian anchoring a minimum of two events and he is well loved by many for his humility and amiable nature. Tee A practically turns from MC to

Tee A practically turns from MC to family friend of the couples he anchor their events. He exudes a captivating aura that simply makes him the best choice for any couple who want to make their big day an exciting one. From his jokes that practically leave everyone panting with laughter and the romantic antics he ensures the couple display, he constantly garners more fans as each weekend pass by and the referrals keep rolling in.

His craft as MC takes him all over the nation from Lagos, Ibadan Abuja and several other cities, even outside the country. He is one versatile comedian that cuts across all tribes as even the Igbo couples love to patronize him, their white weddings are not complete without Tee A as the MC.Although he wears a humble demeanour that belies his wealth,Tee A is currently one of the richest  comedians at the moment as he earns a huge sum as the weekend rolls by although he is very modest about his lifestyle.

He doesn’t fall into the category of showbiz stars who love to flaunt their wealth. Apart from weddings, he is also the preferred choice for celebrity birthday parties and lots more.He was the MC who thrilled guests at Lagos billionaire Rasaq Okoya’s wife Sade’s 40th birthday party, Justice Oguntade’s mum in law’s 80th party, and several others.

He celebrated his 20th anniversary as a comedian with a lavish party last year at Intercontinental hotel and the celebrity studded event was grand in all ramifications. The 42 year old dashing comedian is stylish as well and catches the admiration of ladies hence if you are a big babe and you want to make your friends talk about your wedding, Tee A is best choice because he is a charmer. He  started his professional career as an undergraduate of the University of Lagos before he launched into the scene 20 years ago, growing under the tutelage of veteran comedian Ali Baba. Asides being a comedian, he is also a businessman. He is the CEO of First Class Entertainment and First Class Screens and also recently launched into the auto mobile business where he sells an array of exotic imported vehicles. His family TV show ‘Tymeout With Tee A’ which is a global hit, shows in five continents and hundreds of countries around the world. He is happily married to a gorgeous beauty Kenny and they have been married for 12 years.

How Kemi Olunloyo was Secretly Helped by Her Arch-enemy, Linda Ikeji While in Jail