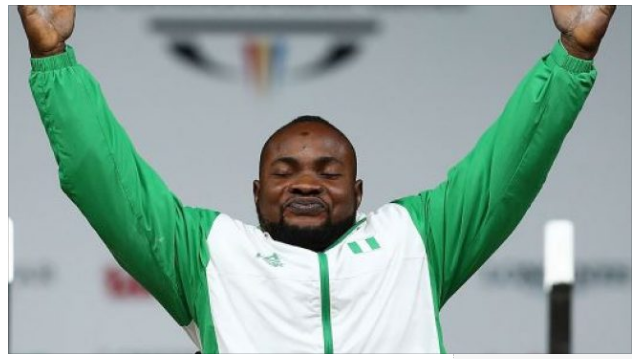 Ezuruike took the top medal in the para powerlifting lightweight category on Tuesday.

He lifted 224.3kg while countryman Paul Kehinde claimed the silver medal with a 219.9kg lift.

YOU MAY ALSO LIKE: LIVERPOOL YET TO CONFIRM SALAH’S AVAILABILITY – KLOPP

England’s Ali Jawad won the bronze with a lift of 182.7kg.

Ezuruike won a silver medal in the men’s 72kg event at the 2014 Commonwealth Games.

On September 9, 2016, he set a new Paralympics record in the men’s 54kg category after lifting 200kg at the 2016 Summer Paralympics in Rio de Janeiro, Brazil.

READ ALSO: FAKE BLUEBAND MARGARINE IN CIRCULATION •HOW TO IDENTIFY THE ORIGINAL ONE