Commotion as Flood Sacks Workers From Their Offices In Asaba 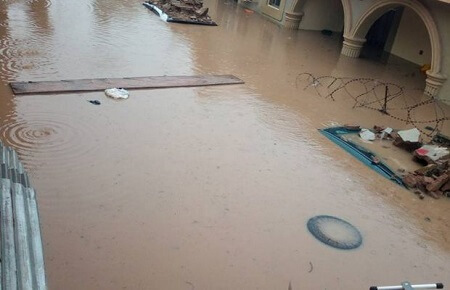 Many civil servants in Delta State were on Wednesday prevented from accessing their offices at the Old Secretariat Complex on Summit Road, Asaba due to flooding, NAN reports.
The flood followed Tuesday night’s downpour in the area.
The workers gathered at the entrance of the secretariat complex with their cars parked on the Summit Road as flood took over the area.
The heavy rain which started at 9pm. was accompanied with thunder.
It also caused havoc on the Okpanam Road under construction.
Junior Staff Quarters Road, Direct Labour Road and Jesus Saves Road were not spared as flood took over them, hindering driving and trekking.
Some motorists abandoned their cars after their vehicles plunged into flooded gullies and drains.
Some schools at the Oko Sixes, near Asaba, were submerged following the downpour.
The state Gov. Ifeanyi Okowa had said that his administration would partner with the Nigerian Society of Engineers to tackle flooding.
Okowa gave the assurance in a keynote address at the 24th Annual General Meeting and Public Lecture of the Asaba Branch of the NSE on Sept. 29 in Asaba.
Represented by the state Commissioner for Works, Chief James Augoye, the governor said that the branch recently presented a report to the state government on how to tackle flooding.
Okowa, who said that the report was receiving government’s attention, charged engineers and other professionals to look inward to proffer solutions to environmental challenges.
Commotion as Flood Sacks Workers From Their Offices In Asaba was last modified: October 4th, 2017 by Arinze Ago

Why I Decided to Write Letter To Buhari – Kachikwu