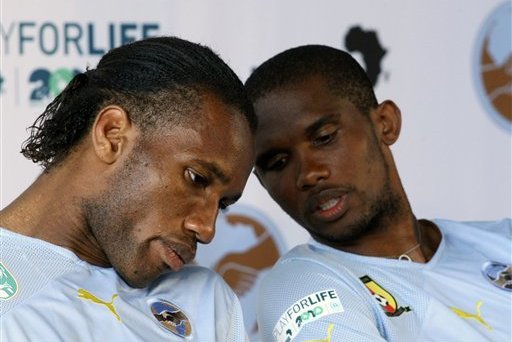 Samuel Eto’o and Didier Drogba have hit back angrily at “racist and contemptuous” comments made by two doctors on French television suggesting studies on drugs to combat coronavirus should be tested in Africa.

Former Chelsea and Senegal forward Demba Ba posted a video of the exchange on Twitter.

Ba commented: “Welcome to the West, where white people believe themselves to be so superior that racism and stupidity become commonplace. TIME TO RISE.”

The comments in question regard the potential testing of the BCG vaccine, generally used against tuberculosis, as a preventative measure against Covid-19.

“If I can be provocative, shouldn’t we do this study in Africa where there are no masks, no treatment, no resuscitation?” asked Professor Jean-Paul Mira, head of the intensive care unit at the Cochin Hospital in Paris.

“The same as for some AIDS studies where prostitutes try things because we know they’re unprotected”.

Professor Camille Locht, research director at Inserm, replied: “You are right. We are currently thinking in parallel about a study in Africa to make this same type of approach with the BCG.

“There is a tender process that has gone out or is going to go out. We will seriously think about that.

“That doesn’t prevent us from thinking in parallel about a study in Europe and Australia.”

Cameroon legend Eto’o replied to Ba’s video on Twitter: “Sons of bitches,” before adding in a post on Instagram: “You are just SH*T. Africa isn’t yours to play with.”

Drogba also called out the comments as “absurd”, with the two-time African Footballer of the Year clearly appalled by any suggestion African people should be used “as guinea pigs”.

“It is inconceivable that we continue to accept this,” Drogba wrote on Twitter. “Africa is not a laboratory.

“I strongly denounce these serious, racist and contemptuous remarks!

“Help us save lives in Africa and stop the spread of this virus which is destabilising the whole world, instead of considering us as guinea pigs. It is absurd!

“African leaders have a responsibility to protect people from these heinous plots.”