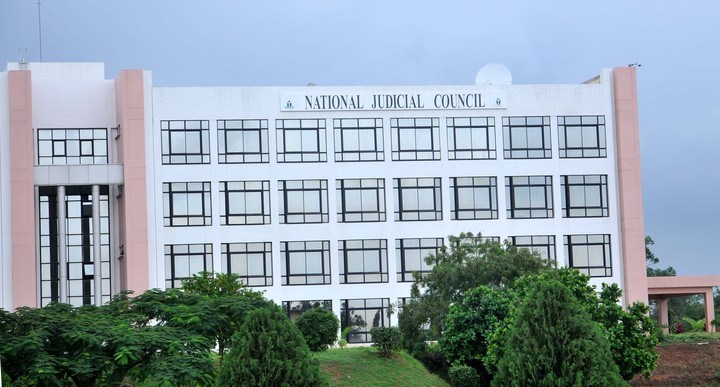 Justice James Agbadu-fishim of the National Industrial Court, Lagos Division, was on Tuesday hauled up before Justice Raliatu Adebiyi of an Ikeja High Court over alleged N4.4 million gratification.
The Economic and Financial Crimes Commission, EFCC, had arraigned Mr. Agbadu-fishim for allegedly receiving N4.4million from seven Senior Advocates of Nigeria, a lawyer and a law firm from 2013 to 2015.
The News Agency of Nigeria reports that the seven SANs accused of unlawfully enriching the judge are — Felix Fagbohungbe, Paul Usoro, Uche Obi, Muiz Banire, Adeniyi Akintola Gani Kazeem and Joseph Nwobike.
The prosecution alleged in the 19-count charge of unlawful enrichment that the judge received funds from a Lagos-based lawyer, Enobong Etteh and Alliance Law Firm.
According to the EFCC, Felix Fagbohungbe deposited N200,000 on December 5, 2013; N700,000 between May 10 and December 19, 2014; N250,000 on February 26, 2015; and N250,000 also on February 26, 205 into the First Bank Account with no. 3008199491 belonging to Mr. Agbadu-fishim.
The anti-graft agency alleges that Paul Usoro between August 5 and December 12, 2015 deposited N300,000; between March 25 and March 26, deposited N400,000 and N100,000 into the First Bank Account of the judge with no. 3008199491.
The law firm of Gani Kazeem paid N100,000 on February 10, 2015 and Uche Obi between October 17 and 20, 2013 paid N200,000; Alliance Law Firm deposited N250,000 into the First Bank Account of the judge with number- 3008199491.
A Lagos-based lawyer, Enobong Etteh, paid N200,000 on two occasions into the First Bank account of the judge with number – 3008199491 on October 27, 2014.
The EFCC told the court that Adeniyi Akintola deposited N200,000 on July 12, 2014, N100,000 on February 10, 2014, N100,000 on February 26, 2015 and also N100,000 on February 26, 2015 into the First Bank Account of the judge with number – 2006900216.
The EFCC claimed that Mr, Agbadu-fishim received N150,000 on December 12, 2014 and N100,000 on September 10, 2015 from Joseph Nwobike into his First Bank Account with number – 2006900216.
Mr. Agbadu-fishim, however, denied the 19-count charge.
After the judge’s plea was taken, Rotimi Oyedepo, the prosecuting counsel for the EFCC, requested for a trial date.
A. Amuda, counsel to Agbadu-fishim, asked the court to grant the judge bail.
“I will ask My Lord for your leave to apply for the bail of the defendant.
“Pursuant to the case of Abiola VFRB, we are saying this with all sense of respect the defendant being a judge of the National Industrial Court was just served yesterday at 5 p.m. with this charge.
“It was at this time that he got the charge that I couldn’t get a flight to Lagos from Port – Harcourt and I had to travel overnight to Lagos to represent my client.
“I pray that the court grants bail to the defendant on self-recognisance; he is a judge of the National Industrial Court and he has started sitting.
“My Lord we plead that your Lordship grants the defendant bail.”
Responding, Mr. Oyedepo told the court that he would not be opposing the bail of the judge.
“I leave the issue of bail to the discretion of your Lordship, I ask that your Lordship secure the bail terms that will ensure the attendance of the defendant,” he said.
In her ruling, Justice Raliatu Adebiyi said: “In Abacha V State, the main function of the nail is to ensure the attendance of the defendant.
“In considering bail, the court must consider the nature of the offence charged.
“No facts have been placed before the court to indicate that the defendant will skip bail.
“The court hereby grants the defendant bail on self-recognisance. He is to deposit his international passport with the Chief Registrar of the court,” she said.
Justice Raliatu Adebiyi adjourned the case until October 11, 12 and 13 for trial.
NAN recalls that the National Judicial Council, NJC, had on June 2 recalled Agbadu-fishim and five other judges from suspension.
A total of eight judges were suspended in November 2016 following a raid on their homes by the State Security Service, DSS.
They include Mr. Agbadu-fishim of the NIC; John Okoro of the Supreme Court; Sylvester Ngwuta of the Supreme Court; Uwani Aji of the Court of Appeal; and Hydiazira Nganjiwa of the Federal High Court.
Others are Musa Kurya of the Federal High Court, Justice Adeniyi Ademola of the Federal High Court and Justice Rita Ofili-Ajumogobia of the Federal High Court.
All the judges except Messrs. Ngwuta and Ofili-Ajumogobia who are both currently facing corruption trial were recalled by the NJC.
The NJC had said that the reason for their recall was the huge backlog of cases in their courts.
The judicial body noted that only Messrs. Ademola, Ngwuta and Ofili-Ajumogobia had been charged to court, emphasising that Mr. Ademola had been discharged and acquitted of the charges filed against him.
NAN