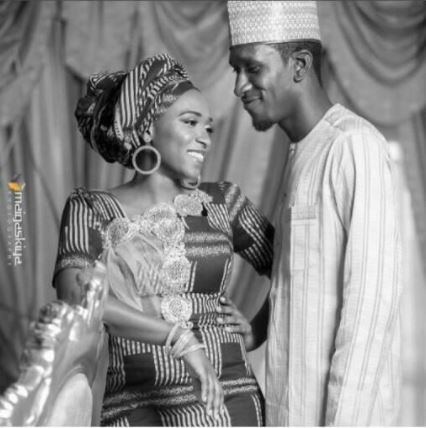 Maryam Sanda was on Friday arraigned by the police before a High Court of the Federal Capital Territory in Jabi, Abuja on charges of culpable homicide for allegedly stabbing her husband, Bilyamin Bello, to death on November 19.
She was accused of culpable homicide punishable by death under section 221 of the Penal Code Law and ordered to be remanded in prison by the judge.
According to a report by Punch, Sanda was alleged to have stabbed the deceased in the chest with a broken bottle. She was also accused of causing Bello “grievous hurt” by stabbing him on the neck, an act said to be contrary to section 240 (g) and punishable under section 247 of the Penal Code Law.
The incident was said to have taken place at about 3.50am on November 19, 2017 at their residence at 4, Pakali Close, Wuse Zone II, Abuja.
After the nursing mother pleaded not guilty to the two counts read to her on Friday, Justice Yusuf Halilu remanded her in Suleja Prison, Niger State.
The prosecuting counsel, Mr. James Idachaba, told the court that the charges filed against the defendant on November 20 were products of a preliminary investigation.
He said with the new facts that emerged after further investigation, the charges would still be amended.
The defence counsel, Mr. Oseni Musa, asked the court to grant the defendant bail.
He pleaded that since the defendant was nursing an infant of less than six months old, she should be remanded in police custody pending the determination of her bail application.
But the trial judge directed that the defence should file a formal application in that regard.
He insisted that once an accused was arraigned, the proper place of custody was the prison and not the custody of the investigating agency.
The judge then ordered her to be remanded in Suleja prison and adjourned until December 7.
Court Throws Maryam Sanda Into Prison for Allegedly Murdering Her Husband Who Is Son of Ex-PDP Chairman was last modified: November 24th, 2017 by Arinze Ago