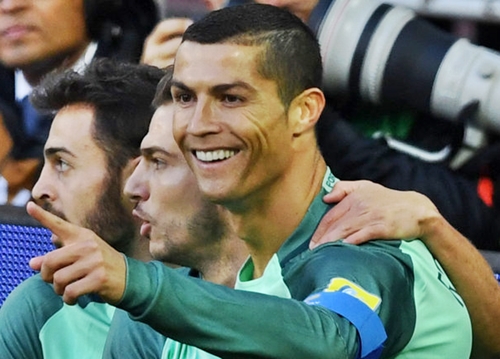 World’s top footballer Cristiano Ronaldo walked out onto the field before the start of the Russia-Portugal football match of the 2017 Confederations Cup accompanied by a disabled ten-year old girl, Polina Khayeredinova, NAN reports.
This is the first time in the history of FIFA when a player was escorted by a disabled child.
This historic event was made possible by the Confederations Cup’s sponsor McDonald’s, showing that football is open to disabled children and lets them get involved in international competitions.
Leaders of football teams taking part in the Confederations Cup will be escorted by disabled children in each of the host cities, Moscow, St. Petersburg, Kazan and Sochi.
The match between hosts Russia and the 2016 UEFA Euro Cup Champions, Portugal, was held at the over 42,700-seat capacity Spartak Stadium, which is a newly-built facility in the Russian capital on Wednesday.
Reigning European Champions Portugal overcame Russia 1-0 in the second group stage match of the 2017 FIFA Confederations Cup.
The first goal in the match was scored on 8th minute into the Russian net by Cristiano Ronaldo, who is the captain of the Portuguese side and is currently considered the world’s top footballer.
More than 350 kids aged between 6 and 10 are participating in McDonald’s children’s program in the four host cities. Most of them come from orphanages, foster homes and low income families.
Other children were selected after a special creative contest. Its jury included Russian football team’s coach Stanislav Cherchesov and former players Alexey Smertin, Sergey Semak and Dmitry Sennikov.
This year’s tournament is being held between June 17 and July 2 at four stadiums in Russia and they are Spartak Stadium in Moscow, St. Petersburg Stadium, Fisht Stadium in Sochi and the Kazan Arena in Kazan.
See photo below… Cristiano Ronaldo Spotted Walking Into the Field With a Disabled Girl (Photo) was last modified: June 22nd, 2017 by Arinze Ago