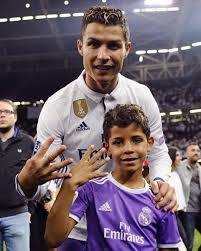 Cristiano Ronaldo’s son has officially joined the Juventus development side just days after Ronaldo claimed Cristiano Junior will follow in his footsteps.

Ronaldo, 33, joined Juve this month in a club-record deal and relocated from Madrid along with his whole family. The five-time Ballon d’Or winner recently told DAZN that he is ‘100 percent sure’ his first-born will emulate him on the football pitch.

According to Football Italia, Giovani Bianconeri spotted Cristiano Jr in training today with the Pulcini 2010 squad reserved for Under-9s at the Vinovo ground.

He’s not the only son of a senior Juventus player, as Mattia Barzagli has been in the Juve side for a couple of years along with Davide Marchisio, the son of club legend Claudio.