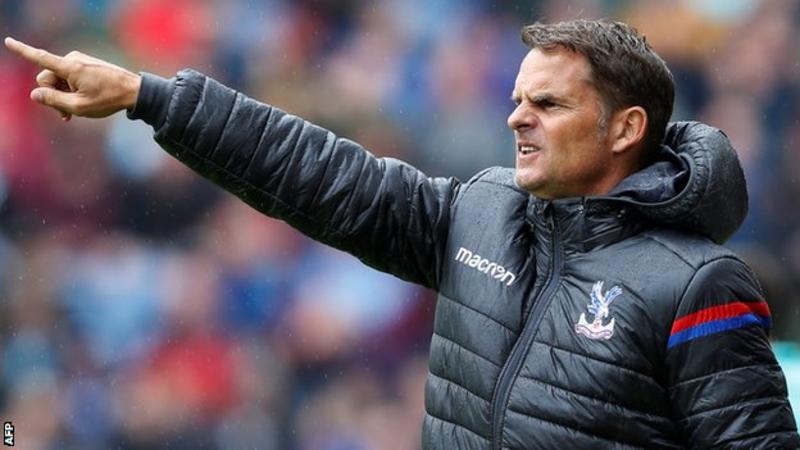 Crystal Palace has sacked Frank de Boer as manager after five games and 77 days in charge.
BBC Sport reports that former England boss Roy Hodgson will replace him.
The Eagles are 19th in the Premier League after losing 1-0 at Burnley on Sunday – and failed to score in their four league matches under De Boer.
His reign is the shortest Premier League managerial tenure in terms of games, and the 47-year-old’s past two jobs have lasted a combined 162 days.
Announcing the Dutchman’s departure on the club website, Palace said: “We would like to thank Frank for his dedication and hard work.”
Former Ajax boss De Boer only took over this summer, succeeding Sam Allardyce, who left after helping Palace avoid relegation last season.
He was sacked by Inter Milan in November 2016 after 85 days.
Prior to that, he had won the Eredivisie four years in a row, between 2011 and 2015.
His only win as Palace manager came in the EFL Cup against Ipswich Town.
Should Hodgson take the job on a permanent basis, he will be the club’s seventh permanent manager in six years.
Palace chairman Steve Parish was at Turf Moor on Sunday and said afterward: “It’s a terrible start but we have to stick together.
“People are frustrated, I’m frustrated, so are the management and players. We know we are better than this.
“I’m defending everyone at the club who is working their backside off to turn this around. Football teams lose games. It happens.
“Who has the better squad, us or Burnley? We had a much weaker squad when we finished 11th. The buck stops with me; I’ve never run away from that.”