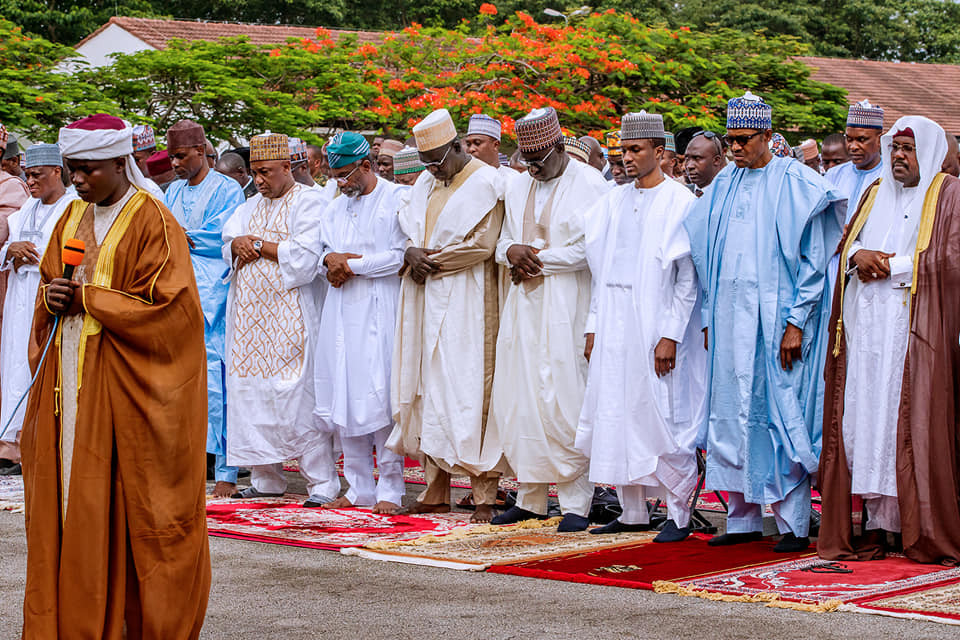 The News Agency of Nigeria (NAN) reports that presidential aides, some cabinet ministers and former governor of Zamfara, Abdulaziz Yari, were among the personalities at the mosque.

It was also observed that Friday’s prayer witnessed seemingly unprecedented number of faithful in what appeared to be an attempt by some “curious worshippers’’ to confirm or disbelief social media story on a purported marriage saga involving the president.

On Thursday, a social media story on Mr Buhari getting set to marry the Minister of Humanitarian Affairs, Disaster Management and Social Development, Sadiya Umar Farouq, as the second wife, went viral.

The media post, which stated October 11 as the wedding date, was also widely circulated on the social media with Facebook and Twitter users aiding its circulation.

However, those worshippers, who were at the Aso Rock mosque to witness `’the social media `created’ wedding Fatiha’’, were disappointed as they only witnessed Mr Buhari exchanging pleasantries with citizens after the prayer session.

Some of the worshippers, who spoke to NAN on the incident, showered curses on originators of the “fake wedding story’’ which dominated the social media for weeks.

Another social commentator, who simply gave his name as Malam Siddique, called on the federal government to urgently do something about fake news in the social media “before it is too late’’.

The President’s Special Adviser on Media and Publicity, Femi Adesina, was on Friday quoted by the Tribune Online dismissing the news, saying it is “a deceptive manoeuvre by those who fabricated the news’’.

NAN also reports that the minister mentioned in the fake marriage, Sadiya Umar Farouk, who is currently in Switzerland on official assignment, posted on her twitter handle saying the news was far from the truth.

“Dear Nigerians, please kindly ignore all rumours as this is not true.

“We are currently completely focused on making sure we have a better Nigeria.

“Let’s continue to pray for our dear country Nigeria. God bless,’’ she said.

344-Year-Old Tortoise, Alagba To Remain In Ogbomoso Palace For Another Century

EVEN THOUGH I AM SUCCESSFUL AS AN ENGINEER IN THE U.S, I STILL CONSIDER MYSELF A NIGERIAN – ETIM SAMUEL EKONG