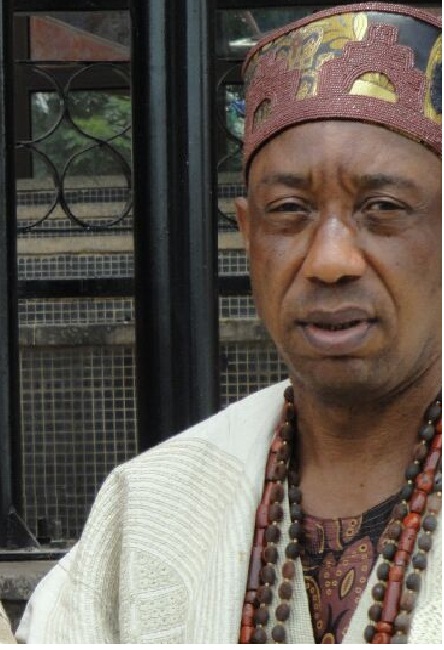 Today marks the 60th birthday of my father, the Oba Alaperu  of Iperu-Remo, and I am grateful for God’s goodness and mercies in my dad’s life. A remarkable man he is, an amazing father he has been. I am my father’s best friend, special adviser, closest critic, secretary, strategist, personal assistant and fashion consultant.

I have composed various write-ups on my various online media platforms like Instagram but writing a piece has been somewhat challenging for me. This is not due to lack of words but because it has been impossible to summarize, in a single article, my experience of a man that I have known all my life and who has played a very significant role in every phase of my journey in life.

I often ask myself if I would make as many sacrifices as my dad has made for me and my siblings. when I have my own children. I have seen him forfeit various opportunities to buy the latest models of cars in order to further the education of his children. He would usually say, there will always be new cars every year but the earlier one gets education, the better.”

I wrote an article exactly 2 months ago, specifically on the day of Obama’s farewell speech. I recalled how way back in 2008 every article or speech about Obama always went missing from my dad’s newspapers. Subsequently. he would remove those pages of the newspaper in advance for my perusal. When I  was 15 years, my daddy bought for me Obama’s book, Audacity of Hope.

I wrote about how, in the wee hours of that November 2008 morning, I ran to a particular sitting room in the house to  watch Obama’s victory speech- that sitting room was my dad’s private sitting room but it became my private sitting room.  Interestingly, my dad would apoloqize if he came in while I was studying or watching the U.S. election news. He would also go to his own room and reduce the volume of his TV to the barest minimum so as not to disturb me. That is the kind of father God blessed me with. He noticed I was paying close attention to a man, Obama, whom the world would eventually affirm as one of the most decent men on earth. He therefore supported my efforts to leam from Obama’s charisma, oratory and sense of being.

My friends can also attest to my daddy’s incredible persona. I vividly remember a  particular occasion. On the night before Babcock University’s 2014 convocation, a friend of  mine requested that her dad accompany my dad in his convoy to avoid Babcock’s traffic  regulations. I asked dad immediately and his response was that life is simple and it would cost him nothing if it makes her happy on her graduation day.

He had never met her or her dad before, yet, he waited for 30 minutes at lIishan roundabout for her own dad who was stuck  in traffic from Lagos. Was that all? He would go on to take her dad and her teenage brother with him to the VIP box. You can imagine the goodwill he bought for me with that single act of kindness.

It is that same goodwill, that amiable persona, those acts of kindness. That resonates every now and then among his friends and acquaintances that span different classes of the society. That amiable persona led to the fact ‘that in less than 3 years of his ascendancy to the throne, the late Ooni of Ife, Oba Okunade Sijuwade, visited my dad. The late Ooni Sijuwade then told guests present that he had not  visited any Oba in his palace in the last 10 years before  visiting my dad. My dad’s goodwill was also affirmed exactly  five years ago, on the day of his 10th coronation anniversary, when one of the most revered monarchs and the longest reigning first class monarch in Nigeria, Awujale of Ijebu land, Oba Sikiru Adetona, arrived the venue of my dad’s thanksgiving service even before my dad, the celebrant. That same day, my friends were shocked to see Oba Saheed Elegushi make a surprise and majestic entry at the reception. The love and admiration for my dad once led to an august visit of my friend, Yomi Odusanya, and me to the first civilian Inspector General of Police, Alhaji Musuliu Smith, who advised us on steps as regards our future undertakings.

As I chronicle some of these moments, I marvel at the kind of man my dad is. I think about what I have to do to be loved by so many. To be candid, he is not a perfect human being. Just like every other man, he has his flaws and shortcomings. But, in his imperfections, he remains good at heart. He often says he does not belong to the wealthy class of the society but he is committed to giving his children a more  than average life. He has done that; he has done more than that.

Rather than build the biggest of houses and own the most expensive of cars, he has invested those extra resources on my siblings and I. I also recall the special recognition he got from Babcock University’s Vice-Chancellor at my convocation in 2013 as I bagged my first class honours. I thank God for that joy he exuded as a result of my efforts. On this day, in a place called Iperu-Remo in Ogun State, the drums would be rolled out by people from every nook and cranny to celebrate him. As I wish him a happy birthday and many happy returns, I pray to God to give him long life, peace and good health to enjoy the fruit of his labour. Amen!

My Dad, Alaperu of IPERU Is An Incredible Man – Son, BOLA BASIBO Writes In From The US was last modified: March 21st, 2017 by City People