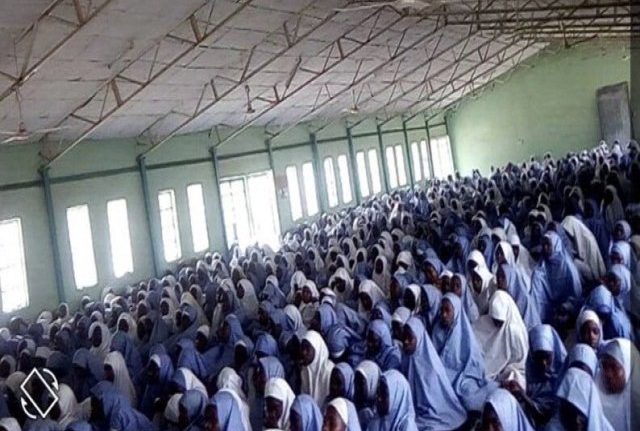 So we wake up one morning, February 19, 2018 and 110 girls disappear like needles in a haystack in a country that is known and called the Giant of Africa, how did we get here? Anyway, that’s what’s on the front burner this week and my thoughts on the disappearance of these Dapchi girls may not align with yours, that’s why I am me and I have a right to my thinking and my thought pattern!

Since the disappearance of these girls 2 weeks ago, so many things have come up, first was the discrepancies in the number of girls that were stolen from their dormitory, the parents forum said 105 and the Federal Government said 110 so we stick with 110 girls each time we talk about the Dapchi girls until some others escape, some get released or they get rescued in a commando-like manner as the Federal Government always does! Recall the paparazzi that greeted the release of the Chibok girls and the jaw dropping comments by some of the girls who decided to stay back with the men they had fallen in love with while in captivity!

Talking about Chibok, what exactly will become of the girls or women still in the custody of the Boko Haram insurgents? A fresh wound has been opened and over 100 families are grieving or wailing about the kidnap of their daughters who were sent to study and therestill is no decisive measure or action to show the seriousness in rescuing these girls.

The rescue operation for these missing girls should have moved beyond newspaper announcements about who has been ordered to move to Yobe or a government delegation visiting Yobe to speak with the Governor, School Authorities and even Parents, Nigeria needs to do more and government needs to be sincere with the people!

Where am I going? Do you remember Mama Boko Haram? Also known as Aisha Wakil, she was a member of the Dialogue and Peaceful Resolution of Security Challenges in the Northern region, set up by former President Goodluck Jonathan. She is in the news again and it is further ridiculing the whole scenario and I am wondering what the parents and family of these girls think! Mama Boko Haram has actually claimed that the insurgent group have contacted her, confirming they have in their custody the abducted 110 Dapchi school girls. Can you believe that? So how come the Government doesn’t know exactly where these girls are? Is it not possible that government can openly engage this woman and get good information about how to bring these girls back home to their parents?

Just like the scene from one of our home videos, Mama Boko Haram says that the abductors called her and confirmed to her that the girls were safe and in good condition. She says “They are even the ones that called me, and said Mama we heard what you have said and told me that they are with the girls and they are going to release them. “I begged of them and said please let this not be another 1,000-plus days of Chibok girls, and they laughed and said no. “I asked them where I can come and stay with them (girls) for two days, but they did not say anything. “I can assure Nigerians that so far they are with my son Habib and his friends; Habib is a nice guy, he is very nice boy.

He will not harm them, he will not touch them, and he will not kill them. “He is going to listen to us, and so far he indicated interest that he loves peace. And I love them for that and believe what they said on this. “They will definitely give us the girls. All I am begging Nigerians is to calm down, be prayerful, everything will be over in God grace,” she said.
She even mentions a name and attests to the fact that he is “a nice guy”, can you beat that and no one is getting hold of this woman and getting all the information required? Sometimes I am tempted to agree when some disgruntled persons call Nigeria a huge joke!

Recently, President Muhammadu Buhari was quoted as saying that the issue of the kidnapped Dapchi girls is getting the attention it deserves and I ask him, “How many of the girls have been rescued”? “Why haven’t some persons be fired for the negligence that resulted in the kidnap of these girls”? “Why hasn’t President Muhammadu Buhari specifically addressed the nation with respect to the kidnap of these girls”?

The return of his son who went abroad for treatment made headlines and all the dailies carred a photo of the President happily welcoming his son back home, how different is his son from the girls who were kidnapped? Yes he is the son of the President and a child to him like the girls who were kidnapped are to their parents so how does he sleep well knowing that these girls are in some kind of discomfort wherever they may be?

I am totally surprised that our dear President, who made the fight against Boko Haram a key issue ahead of his 2015 election win, is facing growing pressure ahead of next year’s vote because of the way he has handled this and other matters concerning Nigeria and Nigerians.

Even after the government repeatedly declares that Boko Haram has been defeated, the Islamic extremists continue to carry out deadly suicide attacks in the northeast and someone wants us to believe that they are winning the fight?
How do we reconcile the fact that the military said it withdrew from Dapchi weeks before the attack, because they believed the town was “relatively calm” and that the security of the area was handed over to police. Police however denied this claim, so whats going on? Nigerian Police denying claims by Nigerian Army, what is really wrong with the House?

This could be the reason why a member of the House of Representatives, Oladipupo Adebutu at the weekend backed the call for the resignation of the Service Chiefs and slammed the present administration for not doing enough in providing security for lives and property across the federation. Who would blame him for making this call? I wont, because it has reached where you have to be shown the way out when you fail to get the job done.

Just like Adebutu, many have recalled how APC politicized the abduction of Chibok school girls in 2014, and they are, as I join my voice too in calling on Buhari’s government to “wage the magic wand it promised it had to rescue the abducted girls”.
Seriously I took another look at the stories surrounding the kidnap or stealing of these girls after I heard of 16-year-old Amina Abubakar Mohamadu who said the Boko Haram insurgents came in soldiers’ uniforms.

According to her, they were deceived, adding, “They were wearing soldiers’ uniforms and they said ‘Come, come, we are here to rescue you.’ “I even stepped my leg into the car, but my elder sister called and said, ‘can’t you see that Allahu Akbar is written on their car,’ that was how I ran out.

“They deceived us. They came with three vans in army colours and they had army uniform, but they didn’t have army boots that is how some of us identified them, through the slippers and their military trouser which did not touch the ground, three-quarter length.

Those were her words and it simply may change the course of the investigation about how these girls were kidnapped plus the reason behind the evil act. Who wouldn’t follow such a lead? Will the Government turn a blind eye to the lead this little girl has provided? Mama Boko Haram says she even asked the insurgents if she can come to spend two days with the girls that means there is an idea of who took them and exactly where they are, so why is the government not bringing them home to their parents?

There are so many questions left unanswered and I want to close with the call by the Catholic Bishop of Bauchi Diocese, Most Rev. Dr. Hilary Nanman Dachelem, who has called on the government and security agencies to keep politics aside and rescue the 110 girls of the Government Girls Science and Technical College, Dapchi, Yobe State, abducted by the Boko Haram insurgents.

These are people’s children and these parents have dreams for their children, these dreams should not be cut off by this ugly incident. 2019 is nearer than we think and I truly do not want to believe that the kidnapping of these girls will be used to throw tantrums and or score cheap points by politicians.
Don’t forget to get back to us with your thoughts on these issues. The Front Burner truly mirrors Real Issues about Real People. Join me again next week!

Dapchi: Comedy Of The Absurd was last modified: March 11th, 2018 by Ify Onyegbule

Awaiting The Names Of Recipients For National...