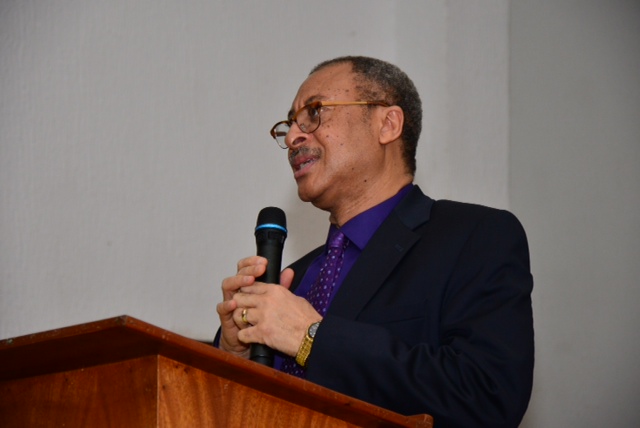 Professor Pat Utomi is a professor of Political Economy. He is also a public analyst. He was formerly an Adviser to former President, Alhaji Shehu Shagari and Managing Director of Volkswagen of Nigeria before he was involved in the setting up of the Lagos Business School amongst other things. The Professor has always expressed concern on wide-spread poverty in Africa, and he is now urging Nigerians to be involved in the forthcoming 2019 General elections. Last week, he spoke to City People Publisher, SEYE KEHINDE and Assistant Editor, SUNDAY ADIGUN. Below are excerpts of the interview.

How do you see the political situation in the country today?

I need to tell you that people are exhausted, instead of adding value to people’s life, the political process has just become a battle field of ego, and personal agenda, whereas fundamental to the process should be the life of the Nigeria people, how to improve the quality of their life, what can we do together. And you have this extraordinary excessive partisanship in which there is no clear direction above individual power play and egos.

And that is tragic for a country. In Singapore, in Malaysia, even Brazil, in their rejuvenation with the leadership beginning with Cardoso and Lula, it wasn’t about ego, it was about people who wanted to see a better country. That is what I see missing in our situation in Nigeria.

In 2015, when the current leaders came in, did you think that it was going to be like this?
Well, the truth of the matter is that the people who worked for Change in Nigeria, most of them were very well intentioned people, who knew their country had come to a sorry past, who wanted an opportunity for a new beginning. For someone like me, who has even a multiple set of reasons, I have been in opposition politics all of my time, not because I just love oppositions because I just taught it was important to build institutions of democracy that lead to good governance. You are to have a strong opposition to government in power, power should be able to move from one to the other back and forth.
The reason Ghana is very ahead of Nigeria is because it has had government moving from the ruling party to opposition and back, and I thought that should happen in Nigeria. So that was enough motive for me to go against the previous Jonathan government.

Then, on top of that, there were specific issues in policy that said to me that we could not sustain this kind of culture of Government, all the money we were now been told were stolen here and there, didn’t come as a surprise to me, I saw clearly the things that shows that there was no control over all.

There is a lot of anxiety now ahead of 2019. People are finding all kinds of excuses to justify why they supported Jonathan or they did not support Jonathan. But the bottom line is any patriotic Nigerian would have known that Nigeria needed to stop the momentum of direction it was travelling in 2015, even the best among people in power will admit that they were performing differently and the possibilities before us, applauded for a different trajectory, but it didn’t quite play out that way.

Mistakes can be made, people can learn, they can adjust, but certainly where we are, is not where we desire to be. And that is the truth.

We have to move forward first, by getting Nigerians to reclaim her electoral space from a small group of people. Whatever party they call themselves, Nigerians have not been involved in this space. So a few power Lords come together, used a lot of resources, doctored elections, bribed ignorant people, declared and announced the result. Middle class Nigerians, educated Nigerians, people who understand the consequence of decision making have almost been completely edged out of the process because of their own making.

How? First, they think it is too much trouble. Second, they think all these criminals are going to do what they will do anyway. Thirdly they think, oh I have 4 wheel drive, I can manage even if the roads are not tarred, I have a passport so I can go off, out of the country if there is trouble. With all those rationalisations, now they are the ones suffering it now. Our vote should count.

That is the starting point. We must all register to vote, the next point is we must go into an organised process of articulating where country should be going, the value that will drive our involvement in politics and we must make a commitment to it, to take over those parties, transform them from within or and if necessary create a third one, that is what is important now, it is a process thing.

How do you see the 2019 process unfolding?
I can’t predict right now, I am not one of those who say NIM, this political movement will become a political party. No. I think the time is short between now and next election. I think the people who have become now sensitive should be encouraged to go into one party and use the force of their numbers to change the parties, if it is then proving that this parties are irredeemable, then after the election, a new party begins work to build up and to go forward.