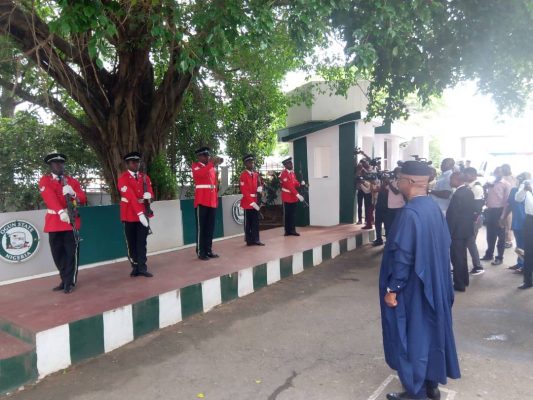 Newly inaugurated governor of Ogun state, Prince Dapo Abiodun on Thursday resumed work at the Governor’s office, Oke – Mosan, Abeokuta, barely 24 hours after he was sworn in as the fifth democratically-elected governor of the state.

Newsmen reported that Abiodun arrived the seat of power at 9:30 am and went straight to inspect the guard of honour mounted by the men of Nigerian Police Force.

Abiodun alongside his Deputy, Mrs Noimot Salako – Oyedele also exchanged pleasantries with the Head of Service, Lanre Bisiriyu and the body of Permanent Secretaries.

Ogun state Governor, Dapo Abiodun, inspecting the guard of honour when he resumes office on Thursday.

Our correspondent reports that Abiodun immediately swung into action by leading his team to inspect key ministries including the Ministry of Finance, Civil Service Commission, Local Government and Chieftaincy Affairs.

The inspection is in progress as of the time of filing this report.