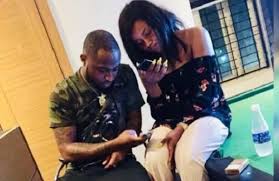 After Davido buys her a Porsche worth about 45 million Naira, it will only be befitting for Chioma to have an endorsement deal double the price of her new ‘toy’.

On May 1, Davido announced via his Twitter  page that his girlfriend, Chioma had gotten an endorsement deal worth 60 million Naira but Davido wanted her to get more, well it looks like they have finally agreed on a price.

The music star hinted this on his Instagram stories when he posted a photo of Chioma, at a photo session for the yet to be disclosed brand.

“OVERNIGHT MILLIONAIRE!!!!!” he captioned the photo.

Perhaps we can say the new endorsement deal is an added assurance alongside the Porsche?