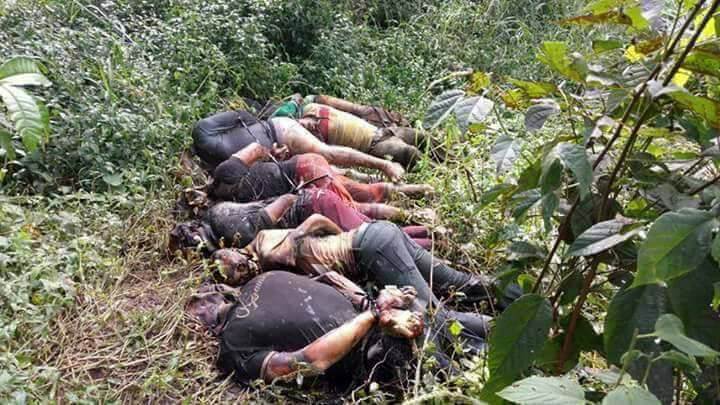 The Indigenous People of Biafra (IPOB) has declared 21 days mourning for its members killed during the military invasion of the home of its leader, Nnamdi Kanu at Afara Ukwu, Umuahia, Abia State.
The group also revealed that it has discovered more corpses of its slain members in a bush within the precincts of the home of its leader. According to the group, 28 of its members were found in the bush following the invasion. About 11 of such bodies have already been interred.
In a report by Sunday Sun, a senior member of the group, Mark Eze Ofuonye, who disclosed how some of their members were shot dead by the invading soldiers, and their corpses dumped in a bush near the home of the IPOB leader, said: “Some of our members, numbering over 28, were murdered in cold blood by the military during the invasion of our leader’s home at Afara Ukwu. The soldiers were doing a sort of mop up operation; whenever they killed any of our members, they carried away the corpse to conceal their horrendous act but it was not possible.
“So, they filled up their trucks with our members’ corpses. The corpses we retrieved and which we are burying at present are those the soldiers could not carry.  They just came out with the intention of killing any human being or living thing that was found in the compound of our leader. The people they met were not armed still they shot them, even people just standing nearby and those passing through the area were caught in the attack.”
Continuing, Ofuonye said: “The corpses we are burying now (referring to the day of the interview) were found inside the bush. They were shot by soldiers and they ran into the bush with bullet wounds thinking that they could receive help there but no help came their way and they died inside the bush. Some of the dead bodies were discovered last week inside the bush at the back of Nnamdi Kanu’s house. The 28 were those ones that were killed within the axis of the house of our leader. But the total number killed within this range is 305 persons.”
The IPOB chieftain who said there was no need for the operation by the Nigerian army as members of the group did not carry arms neither were they violent, added that the leadership of the group declared the 21-day mourning for their slain members.
Disclosing that those killed were from the Eastern heartland, Ofuonye said that in addition to burying the dead, the group is also treating the injured and taking care of the imprisoned ones. “We lost very vibrant and lovely youths who were just peacefully asking for their rights, but the Nigerian government chose to use brute force on them. Some of our members, who were forced to drink poisoned water, have been defecating blood and we are also treating them. About 76 of our members were dumped in Aba prisons under the most inhuman condition and many of them are ill. A lot of things are being done against our members, but the most beautiful thing about all these things is that the horrible experience we are passing through is giving us strength. The spirit has risen, the enthusiasm has come because when you look back and see you’ve lost a lovely one, a colleague, going back becomes a very big problem; you can’t go so that it will not look as betrayal. As I speak, we are establishing more zones and new members are coming in, we are winning the war of battle of hearts and minds,” he assured.
He said the 21-days of mourning began October 26. He was emphatic that the struggle would continue, stating: “Because in any struggle, people die, but the only painful aspect of it is that we lost young boys, youths who had bright future. In the civilized world, you don’t touch people like that, no matter what they did, at worst you take them to court; but we have drawn strength from their death and we are not going back.”
He advised the United Nations to send its representatives to the home of their leader at Afara Ukwu to be able to see how soldiers invaded the house of a core civilian with heavy armoury and none of the soldiers sustained any scratch which he said was an indication that despite the propaganda mounted by the Nigerian army, the IPOB members were not armed.
Decomposed Corpses of 28 IPOB Members Allegedly Killed By Nigerian Soldiers Found Hidden Inside a Bush in Umuahia, Abia State {Photos} was last modified: November 6th, 2017 by Arinze Ago

‘Do you want me to chase him?’ – Mourinho plays down missing Conte handshake