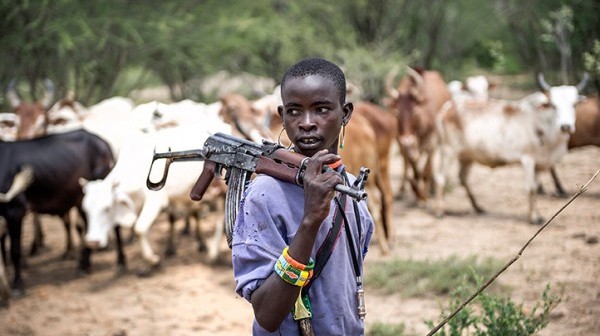 Members of the Ayakoromo community in Burutu Local Government Area, Delta State, yesterday, raised the alarm over an alleged plan by suspected herdsmen to encroach into the riverine community and forcefully appropriate land for grazing.

Ayakoromo Activists Forum, ACF, in a statement jointly signed by the acting President, Austin Ozobo and Alaowei Cleric, said there was already tension in the town, as many women could no longer go to their farms for fear of being raped and kidnapped.

The group disclosed that three of the herdsmen who entered the community without invitation, December 30, 2016, on a preliminary stakeout, claimed when they were confronted by suspicious villagers, that they were sent by their “Oga” in Asaba.

It was learned, however, that a leader of the community had contacted the Chairman of Burutu Local Government, Mr Ebikeme Clark, who did not hesitate to draw the attention of the Divisional Police Officer, DPO, in the area of the alleged plan.

The DPO in response to Clark’s alert contacted a leader of the herdsmen simply identified as Musa, whom he asked to tell his people to “stay the action pending amicable settlement and agreement with Ayakoromo people.”

This is because the community told three Fulani herdsman, who entered our land without invitation on December 30, 2016 and who claimed to have been sent to the community by their Oga in Asaba, Delta State, that we have no land to give them for grazing purposes and besides, the community is celebrating its annual festival, which forbids any individual from entering the community’s forests.

“The three herdsman responded by saying that they had freedom to move their cattle to anywhere in Nigeria and as such, they will come to Ayakoromo town with their cattle,    whether we like it or not.

“When our people insisted on observing our sacred tradition, which forbids people from entering any of our forests for as long as the festivity lasts, the herdsman said they would go and get further directives from their Oga in Asaba.”

The group noted: “Ayakoromo is a waterlogged community which is not suitable for grazing. The only time we manage to see land is the dry season from December to February in every year and that is the period our people manage to cultivate farms. There is no land in this riverine community that is available for herdsmen to graze their cattle, except they are saying that we should surrender to them our farms which are our only source of livelihood.

Delta community cries out over plotted invasion by herdsmen was last modified: January 4th, 2017 by Reporter