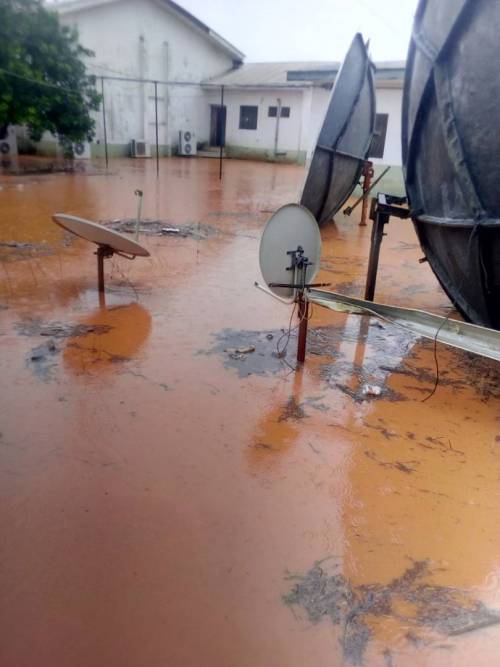 The flood, which also affected the popular Ibusa Road and other parts of the state capital, destroying properties, exposed the inadequacies of the state government’s ongoing multi-billion-naira flood control measures in Asaba.

It would be recalled that during the inspection of the multi-billion-naira drain system in Asaba, Okowa had stated that an additional N13billion was needed to complete the project.

The project, alleged to be a conduit pipe for looting from the state treasury, especially to prosecute the Governor’s second term ambition, has continuedymaking life unbearable for residents whenever it rains in the state capital.

SaharaReporters learnt that following the downpour, DBS, which is already in a state of deterioration for lack of funding, went off the air.

In another development, Kingley Esiso, Delta State Chairman of the People’s Democratic Party (PDP), has raised the alarm over the deteriorating condition of the state-owned media house, saying if the station is properly managed, it can compete favourably with private broadcast media outfits in the country.

Esiso stated this while playing host to the executive of the DBS Warri chapel of the Nigeria Union of Journalists (NUJ), led by its Chairman, Sonia Unobunjo at his office in Asaba.

He expressed shock at the general outlook of the place when he visited it for a programme weeks back.

He lamented that the station could not even boast of video cameras and editing facilities.

Speaking earlier, Unobunjo appealed to the PDP chairman to help convince the government to pick more interest in the station, and assist with video cameras, laptops and audiovisual editing facilities.