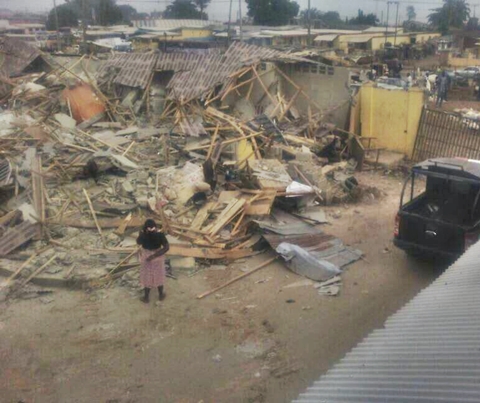 Demolition of shanties in Obalende began this morning by Lagos State Government. The demolition of illegal structures and shanties is currently ongoing.

Before now, the government served another 48 hours ‘Abatement Notice’, Tuesday, 25th to Thursday, 27th of July, 2017, to all owners of illegal structures and shanties including containerised shops around Obalende to remove them immediately or face demolition and prosecution.

According to Task Force Superintendent of Police, Olayinka Egbeyemi, the illegal structures and shanties including containerised shops were directly constructed right on water channels thereby, blocking free flow of water through drainage and canals around Obalende which caused floods whenever it rains.

The first notice they go was 6 months ago, but many still left the illegal structures there.