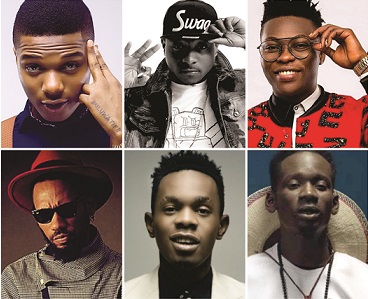 Unarguably, Tekno was one of Nigeria’s hottest male acts of 2016. The young lad came from been a promising act to leading the pack of artistes with hit songs back to back. Tekno had singles like Duro, Wash, Where and Pana trending in Nigeria last year, it is obvious every single was a hit back to back. The TrippleMG youngster surprised a lot last year with tens of million YouTube views and non-stopping airplays.

He also joined the league of “Nigerian-Internationals” as he bagged a deal with Top U.S Music Label, Sony BMG. So far this year, his 2 releases, Yawa and Rara are already hit songs and gathering massive views and airplays again. Tekno is really not slowing down. Could he beat our last year winner to the award this year?

Kiss Daniel clinched the award last year after churning out hits after hits in 2015 to mid-2016 where the review window spanned. The singer definitely had an amazing year after dropping his album, The New Era. The singer had quite a lot of hit singles last year which trended nationwide.

He had at least 3 songs on the list of the biggest songs in Nigeria 2016, the singer is definitely among the highest paid artists in Nigeria after headlining countless shows. What more qualifies him as the Winner of the Best Male Music Act of the year 2016 at the 7th City People Entertainment Awards? But the game just got a whole lot tougher as the other nominees in the category have equally stepped their game up and are ready to put in another fight for the award. Wizkid, Davido, Olamide, Falz and Phyno all lost out to Kiss Daniel last year but from the list, you can tell it’s about to be a tougher fight this year.

The City People Entertainment Awards (CPEA) is an annual award ceremony with primary objective of recognizing the contributions of Nigerian and African Entertainers.

The award ceremony, in its 8th year, is not only focused on recognizing Nigerian entertainers but also highlight Nigerians who continue to make an impact in our immediate communities in Nigeria or extended communities in the diaspora.

This year’ producers of the City People Entertainment Awards have decided to lay emphasis on the new talents in the industry. As we countdown to the prestigious event, we take a look at the most important male category in the music sector and wonder who would emerge the winner this year.

Considerably, with Tekno and Kiss Daniel both having a fantastic run as discussed above, let’s see who else has done exceedingly well so far.

Phyno for sure has won the heart of many with his indigenous rap style. Financial Woman featuring P-Square, the intriguing “Mistakes” video and the top collaboration with 2Baba and Flavour on Okpeke, you can tell that Phyno launched into 2017 battle ready for the top spot. Phyno sang one of the biggest songs of the year 2016 “FADA FADA” featuring Olamide and as expected; the song was one of the most downloaded songs of the same year.

Nigerian singer, Runtown was crowned the best ‘African Artiste of Year’ at the 18th edition of the Vodafone Ghana Music Awards, which held at the Accra International Conference Centre on April 8, 2017. The ‘Mad Over You’ singer who has been dropping hit songs back to back, beat fellow Nigerian singers, Patoranking, Mr. Eazi, Tekno and Nathaniel Bassey to scoop the award.

The magic wand for this young music act is definitely his track “Mad Over You”. Would this track help him win the Best male Act of the Year at the CPEA2017? The Eric Manny Frontline Star sure has a lot more to offer this year. Don’t forget he recently shutdown Lagos just few days ago with his Lagos “One Night Only” Concert. 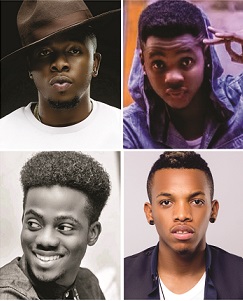 Before the concert, Runtown had been on a winning streak selling out concerts in London, America and other countries in Europe. Then news of his new whip; a 2017 Lamborghini Gallardo shook the industry. With the success of the One Night Only concert, Runtown now focuses on his Glo Nationwide tour that’ll see him perform across 27 Nigerian cities as well as the release of his next smash hit single titled ‘For Life’.

Insurmountable to the fact that these three – Korede Bello, Reekado Banks and Mr Eazi have also played important roles in hit making numbers in the review window of mid-2016 to date, they can’t be left out as contenders of the title. Do Like That by Korede Bello which saw a magical remix with a member of once popular American female band “Destiny Child” – Kelly Rowland, had it original number numbered at 24,507,904 views, oops, add an extra 1 to that as we just clicked play on that – was a nationwide hit and remains shocking has just a single hit remained the most topping track on the chart for months. With his album released last month, one would wonder if Korede Bello could spurn major magic to win this year’s Male Act of the Year.

Reekado Banks has been churning out tunes that diversify into various interest of wide music lovers. The “Biggy Man” Crooner, which is his latest has stayed consistent too all the while through the review window dropping hits upon hits. Would this break him through or would we need to hear more to be convinced? Only time would tell.

Someone please tell us to take it easy with Mr. Eazi. This guy came into our lives unexpectedly, after being signed by Wizkid the singer gained momentum in Nigeria when all his songs started trending in Nigeria all at once; the singer at the moment is definitely loved by almost every youth music lover. The singer has done so many collabos and even featured by big artistes in Nigeria this year, he’s been an amazing artist and he deserves this spot. We hope you Zaga Dat

#WhaYaSay pundit is still as relevant as he was 2 years ago; the singer dropped his album last year, an album which didn’t do badly commercially. Patoranking is an artist who whenever he drops songs they blow even outside Nigeria, the singer won several awards last year, he haven’t slowed down any less this year has he has worked with major names in the industry and churned out hits so far, including “No Kissing” featuring Ghana star, Sarkodie.

Now, it’s the battle of the “Nigerian-internationals”. DavidO and Wizkid have done Nigerians proud by taking our music outside the multiple borders of our territory. Both Wizkid and Davido are famous and rich. The artistes have bagged international deals, both acts have featured multiple international acts and we could keep their international records going and going. But, over the years, they’ve both competed over who is better as Nigerian music lovers have also fueled the course. Would any of them bag the award this year? Or would it be another act?

Visit our twitter – @CityPeopleMagz timeline and join the conversation. Use the HashTag – #CPEA2017 and name who you believe should win this or any other category.