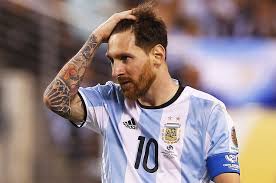 Barcelona superstar, Lionel Messi encouraged his Argentina team-mates after seeing them get thrashed by Spain 6-1 in an international friendly game during the week.

The South American giants were humiliated 6-1 in Madrid in what was their heaviest defeat to European opposition since 1958.

Messi was unable to play after tweaking his hamstring in training prior to the game and watched from the stands.

Messi was unable to continue watching when Spain scored their sixth goal during the second half.

But despite his disappointment, Messi had some encouraging words for his team-mates in the dressing room after the game.

Spanish newspaper, Diario Ole reports that he told them, “We come through this together. United.”

The newspaper reports that the gesture from Messi was appreciated by his team-mates.

Details Of What Lionel Messi Told His Argentina Teammates After 6-1 Thrashing By Spain was last modified: March 30th, 2018 by Igbokwe John