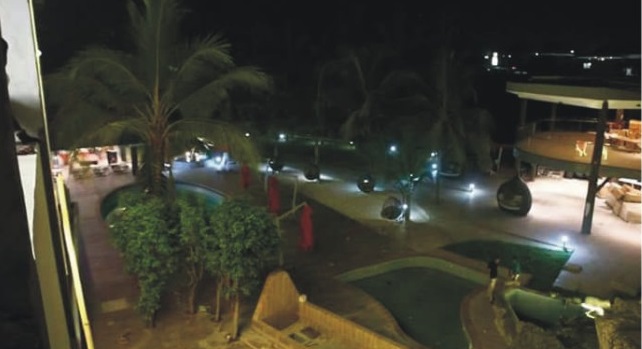 •The Owner, OBIORA OKONKWO Reveals Game Plan
When The Dome Club came onto the Abuja social scene about 20 years ago. It took the city by storm, bringing in top celebrities from far and wide and offering a platform for many young artistes to showcase themselves. Today, many of those artistes have become household names.

Then it was the place to be for celebrities and fun-lovers at various level of the society ladder, what with the bowling centre which was the first in West Africa, there was no end to fun at The Dome then.

Located in Abuja’s prime location, near the World Trade Center , The Dome which also doubles as an events place now comprises of the Summit Bar and Restaurant, the Wesley Snipes Lounge, The Satchmo Cigar Lounge. Retaining its family oriented culture, the new look, Dome Abuja returns with the Noni’s Pizzeria, Camelot Spa and Gym, a bowling alley and newly introduced, Francis Boutique hotel.

For fun lovers, many of these were not there before, especially the Francis Boutique hotel which is not just a hotel but a home away from home. The Dome years back at its peak had two Lounges, but now there are four different lounges including the highly exclusive Cognac and Cigar lounges. Then the outdoor bar located beside the fountain offering those who love to sit out a new vista with live band and a natural scenery.

Despite the talk from Abuja’s celebrities around the re-launch of The Dome after the huge investments that has been made to make an impression, Obiora Okonkwo, the owner in his usual calm self believes things will follow a normal pace as the entertainment and relaxation centre has its own crowd.

Okonkwo, who blazed the trail in investing heavily in Tourism and Entertainment, years before the frequent calls for significant investment into the non-oil sector told reporters, the new look Dome is worth the wait. He also opined that the multi-purpose centre will quickly retake its position as the right place to visit offering the best to Very Important Personalities as well as other levels of fun-seekers.

“What makes the new facility unique is, as you can see, it is not just the contemporary architecture you see around. We also have a new and improved organisation which is left in the hands of competent and trustworthy managerial team”, he said. “The Dome itself is a brand, it’s a destination . It’s not a one- stand activity. We’re not a night club…it’s a place you go and see a whole lot of things under one roof.

Before now, we had the night club, we had the bowling alley, which as we speak today is the only 10- pin bowling center in the whole nation. We have the fitness, we have the outdoor, so it’s not like a one- spot place. Now it’s even bigger and better. “In those days, The Dome was something that was conceptualised with a youthful spirit.

“Now a lot of years have gone by and most of the activities are not high- octane activities, there not like clubbing, clubbing, but it still a good ambience for good lounging, bar and most importantly, we have a good kitchen and we can have cuisines from all over the world. “The way it is now, The Dome now stands as the destination for hospitality and recreation. It’s a destination where your family, friends can host corporate events, with gym, accommodation, dining, dancing and all sorts”, Okonkwo added.

The man behind The Dome also explained why it took a long time to return the centre back to business. He said: “Just as you may be aware, entertainment and hospitality are sectors that have a life. At one time it’s bubbling, at other times, it needs to take a break to rejuvenate. “Some of these sometimes may be for strategic reasons. So, in this case at some point, it was very difficult for Dome to function because of a whole lot of community development going on around us. The road network , the constructions, access became almost impossible .

“Some of the construction were actually getting close to the Dome and it was negotiated that we just had to give them a little break- a short time to finish. So, six months went into one year and one year went into two years. And we had operated for 10 years. According to Okonkwo the closure of The Dome gave his team ample time to re-strategise. “We felt it was also a good time to go back to the drawing board and then come up with something new that will also be a reflection of our new vision for the industry in like 10 years to come. If you recall, we came 10 years ago, we had to set the agenda for 10 years to come. So, it’s a combination of these factors that actually made us to the drawing board.

“We closed down, went into a lot of work. Obviously by our own initial design and plan, we would have been up about now and functioning fully. But for some, other reasons, the economy has its own toll. Then other logistics. “But the good news is that we are coming to the end of that and the Dome will soon be fully back with a whole lot more activities”, he said.
“With what you’ve seen, I’m sure you have an answer to it because politics has nothing to do with what’s on ground. What we have is a well- planned, well- tailored programme of reconstruction and re- engineering.
–Bamidele Ogundana

How Asiwaju TINUBU Accepted Me The 1st...