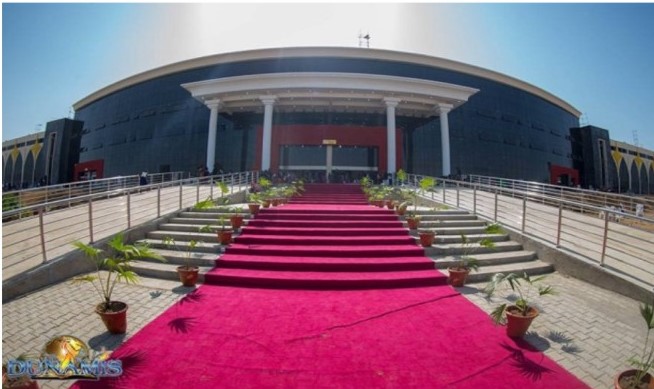 A few months ago, a 100,000 seater church was opened in Abuja. Termed the largest church in the world, Glory Dome is owned by Dunamis International Gospel Centre. It is an architectural masterpiece. A few months ago, it was dedicated. It became major news when it was declared as a 100,000 seater capacity church. As we speak, the beautiful edifice remains the largest church in the world ever documented in history. Many foreigners have been trooping in and out of Abuja to behold the gigantic edifice. It is one of its kind and this further placed the status of Dunamis Gospel church led by pastor Paul Enenche on a high pedestal.

Pastor Paul Idoko Enenche’s world’s largest church auditorium knocks off every other church’s building in terms of capacity. No wonder, its dedication was attended by high and mighty and a host of renowned Ministers of the gospel from all over the world like Evangelist Reinhard Bonnke, Dr. Morris Cerullo, Archbishop (Dr) Margaret Idahosa, Prophet Isa El-Buba among many others. The dedication of the building was rounded up by events of the DIGC 22nd Anniversary convention; a week-long program known as Kingdom, Power and Glory Conference.

Before the building of the Glory Dome, Dunamis church Headquarters in Area 1, Abuja has been in use for over 20 years and it holds 6 over flooded services every Sunday which has necessitated the need for a relocation to a newly completed facility. The Church had given the Area 1 Old Secretariat environment several facelifts and changed the look of it from a crime infested area to a dignified ‘church street’ by equipping the police with security vehicles, fixing the roads and procuring transformers for the area among others. The area presently hosts over 10 churches.

The development of the Lord’s Garden and the construction of the Glory Dome lasted about 4 years. The dome is about 43 metres from the floor level. That is about the height of a 13-storey building. Apart from the Glory Dome itself, the Lord’s garden has a recreational park, that would make the place a holiday destination, a tourist attraction and a vacation location. The glory dome has specific features, apart from its largeness, it was well finished with well-rested chairs. It has a gallery around it and specifically, the altar was meant to be central where everybody would be viewing the minister at the same time. The main entrance facing the altar was architecturally designed too as one of the focal points of the building. It would interest you to know that the roof was knitted like a basket. It has 21,000 pieces of metals that were hooked together.

On how the church was built and reason for the construction, Pastor Paul Enenche explains, “We thank the Lord for his goodness and mercy. The vision for the building of the Lord’s Garden and the Glory Dome is synonymous with the vision of the Dunamis International Gospel Centre. We ‘broke’ ground on September 14, 2014. I think it is the scripture that says God would keep in perfect peace the one whose mind is stayed on him. This is not my building. If I were to build a house, I won’t build a house as big as this. So, it is for the Lord, and because it belongs to God, it can’t put me under pressure, because the owner is not under pressure. The earth is the Lord’s and the fullness thereof. God has never been under pressure to do anything. So it is stress-less. This is a multi-billion project. The roof alone is in billions not to talk of the construction. But it was done effortlessly and without stress.

The church members are not even under pressure. We did not at any point call for general offering for the project in the church. In fact, so many times, we forget to take the offering in church and members would have to remind the pastor that offering has not been taken––and this happened often while a major construction was ongoing. The truth is, we have a supernatural supply. We cannot point at any man that he’s the financier. The roofing company came as a consultant, the installation of the roof was entirely our business and what we did was to get a group of Nigerians in thousands and train them on what it takes to knit the roof together and these people were trained to scale a height of 43 meters and knit. The roofing company said that this is their largest roofing in the world, and they are the foremost roofing company as far as dome structure is concerned worldwide.

Literally, thousands of people from all religions had a livelihood, some on the minimum of three to four years, especially at a time when unemployment was a major issue in the country. Artisans, electricians, plumbers, bricklayers, painters and many others got employed.

So it was massively supplied by heaven. That is what makes it a miracle. If this construction could happen when Nigeria was in an economic boom, it would have been said that it was easy. But given the circumstance under which it happened, it becomes a miracle. In all this, we give glory to God’’. The church now holds its major services at the dome every Sunday and some weekdays. It has become the church where many youths go to and many prominent personalities in Abuja.