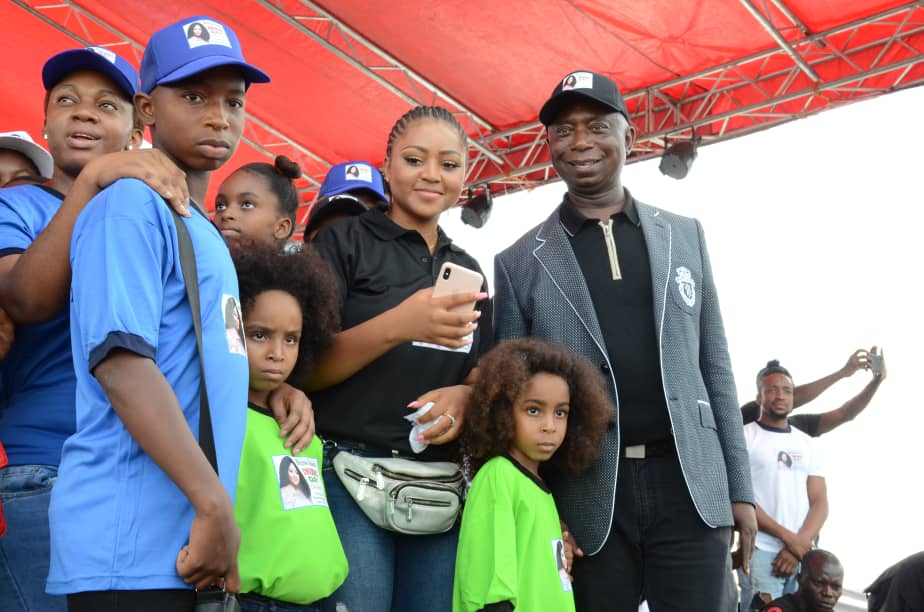 It was not a political campaign, neither was it a UEFA Champions League final match. But Agbor Government Field on Monday, May 27, 2019, was thronged by thousands of people, as a mammoth crowd of men, women and children scrambled to have a view of the young screen diva, Regina Daniels who gave Delta State something that will be talked about for a long time to come.

May 27 which marked the annual Children’s Day worldwide will forever remain green in the minds of everyone in Delta state, all thanks to the Regina Daniels Development and Children Foundation of people. It hosted a good number of A list Nigerian celebrities just to give her people a ‘once in a lifetime experience’ and pour out love to all the children in attendance.

Regina proved beyond doubts that stardom and fame should be about giving back to the society that has stood by you always when her foundation landed the community with a first class live entertainment, match past and truckloads of gift items for all children in attendance. As if that was not enough, an eventful after party was also held at the presidential palace of Senator Ned Munir Nwoko, the father of the Day.

City People’s DAMILARE SALAMI was there and he’s here with details for your reading pleasure.

Agbor Government Field located in the heart of the ancient town of Agbor in Delta State was selected as the venue because of its capacity but it later proved to be quite small as crowd from far and near numbering over 20,000 people thronged the venue all for the 2019 edition of the Regina Daniel’s Children’s day carnival.

The celebrity of the day, whose foundation has brought smiles to thousands of families, Regina Daniels and her husband, Dr Ned Nwoko’s presence at the event was suddenly marked by shouts and cheers for the couple as they were guided by the security aides to their seat. Regina Daniel’s name was practically on the lips of all the women and children, showing their love for the young woman who is gradually becoming the God-sent angel they have been praying for. Proudly walking beside her was her husband, Prince Ned, a Senator-elect whose philanthropic gesture has gone far beyond the shores of Nigeria. Both found their way to the high table but not without their admirers attempting to either touch or snap selfies with them.

No sooner had the match pass ended about 3 pm than the entire space was taken over by school children, parents and many other admirers of Regina Daniels who has become a brand in the entertainment industry.  It was therefore not surprising that scores of celebrities cutting across the music, acting, and comedy sub-sectors were in attendance.

Leading the pack of the musicians was Tiwa Savage, a celebrated crowd pulling singer of the hip-hop genre.  She literarily set the stage on fire with the crowd almost causing a stampede. Her performance was greeted by excited cheers from the crowd who obviously wanted more from the Kele Kele love crooner.

Popular Nigerian singer, Omoniyi Temidayo popularly known by his performing name, Zlatan Ibile took Agbor back to the street as he dished out several of his hit tracks to the pleasure of the ever waiting crowd. The audience sang and danced along with him as he displayed his Zanku dance skills. One would have thought it was a Lagos carnival when he took over the stage. The children who were the reason for the event were not left out of the fun as well.

Patoranking’s dancehall and reggae vibes simply filled the atmosphere as soon as he was announced. The crowd was practically waiting for him as they almost immediately took over after he landed first lines of most of his songs. Regina Daniels herself moved her body to the tunes oozing out from the Onicha born singer.

African China was also not left out of the party. He delivered as expected and gave the audience something to cherish after departure. One would have thought he was an Agbor indigene the way the crowd cheered and accepted him after his performance.

MC Galaxy didn’t let his Agbor fans down. He treated them to a memorable evening by delivering songs from his evergreen and recent hit songs. It was fun all the way for both the artistes and the audience because both parties affirmed to have had unlimited fun.

Nollywood family members were proud of their own and also showed love for Regina Daniels as they marked the event with their presence. Ejike Asiegbu, Bob-Manuel Udokwu, Alex Usifo, Zulu Okafor, Chinedu Ikedieze were among the top stars sighted at the event.

REGINA DANIELS PULLS CROWD FROM ALL WALKS OF LIFE

People from other walks of life from Delta and other states were also in attendance.  By their presence, it was quite evident that Regina Daniels, whose husband Dr. Ned Nwoko was the ‘man of the day’ is greatly admired by many.  Some of the ladies who came to the event with their children could be heard expressing their happiness for being able to make it to the venue.  As many of them struggled to catch a glimpse of Regina Daniels who ostensibly has become their ‘idol’, the population continued to increase and almost making it impossible for event photographers and cameramen to take good shots of artistes on stage.

It was a hectic time for Daniels as she tried to pass her message across to the children.  While on stage in the company of her husband, she had taken time to advise children to learn to live decently by not indulging in drug-related activities and other social vices that could ruin their life. The joy of the children knew no bounds as they received some gift items from the actress.

As part of the programmes to commemorate the event, Sen Ned Nwoko gave out one million naira worth of scholarship each to twenty first class graduates of the Federal University of Petroleum Resources, Efunrun (FUPRE), Delta State. The students were full of praises for the kind gesture the Ned Nwoko foundation showered on them and promised to remain good Delta ambassadors of and the country at large.

CHILDREN GET TRUCKLOADS OF GIFTS

Children of all ages and even parents present at the carnival would count themselves lucky as they went home with truckloads of gifts. Ranging from bicycles to school bags, writing materials, clothes, toys of all kinds and many more, the gifts were innumerable. The Children were all smiles as Regina Daniels took away their sorrow. They all went home rejoicing.

Regina Daniel’s mother, Rita, another popular Nollywood face was a proud mother at the event as she stood by her daughter all through. She also addressed the audience, advising children to pay attention to their education and remain focused on their chosen path. Rita also encouraged women to always show love and support for their children in whatsoever positive steps they take.  She said the joy of motherhood is to see their wards succeed and encouraged all mothers to give their best to their children.

Policemen, officials of the Nigerian Security & Civil Defence Corp, Federal Road & Safety Commission and private security guards had hectic time controlling the crowd.  They probably had underestimated the number of people expected at the event. However, there were no casualties as everyone went home unhurt despite the restless nature of the Mammoth crowd.

The carnival which lasted till evening hours was only part of activities ear-marked by Regina Daniels for the day as guests later shifted to the country home of Dr Ned Nwoko at Idumuje-Ugboko in Aniocha North Local Government Area of Delta State. The after party was another fun time as MC Funny Joe and Famous thrilled audience with various rib cracking jokes. Musicians, Nollywood personalities, comedians and many others were there to wine and dine just as music of different genre was supplied.

Beautifully illuminated was the lawn tennis court and the Olympic size swimming pool inside Sen Nwoko’s compound. About 1,000 guests were in attendance at the after party.

It was certainly another time to felicitate with Regina Daniels and her family as she took time to move around to appreciate guests who had helped to make her day.