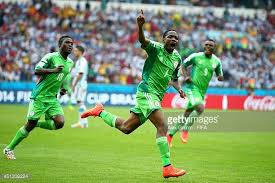 While attention has been focused on traditional heavyweights among whom will be the likely winner of the next installment of the World Cup this summer in Russia, world famous football blog, 90min.com has tipped Nigeria’s Super Eagles as one of the seven countries that will prove bookmakers wrong when the tournament gets underway in June.

Super Eagles will play traditional foe and potential winner, Argentina, Croatia and dark horse, Iceland in Group D which by all standards is a tough pairing for the three-time African champions to survive.

However, what is giving the respective blog the hope of Nigeria doing well in Russia is the achievement recorded by Eagles since Franco-German gaffer, Gernot Rohr, took charge for the African qualifying series and friendlies.
90min.com tipped Nigeria alongside six other countries namely; Denmark, Poland, Senegal, Sweden, Egypt and England as likely teams capable of going all the away to the final for the converted trophy in July.

“Another exciting African team is Nigeria, who haven’t played at a major tournament since the 2014 World Cup after failing to qualify for either of the last two Africa Cup of Nations.

“People might be expecting Iceland, who reached the quarter-finals at Euro 2016 and qualified well for this tournament, and Croatia to be battling it out for second place behind Argentina in Group D, but the Super Eagles have more than enough talent to make a case of their own.

“What’s more, finishing second would likely pair them with a French team not known for their spine or resilient tactics in the first knockout round,” the popular blog remarked further.

In the build up to the World Cup, Super Eagles will play against Poland in Wroclaw on Friday, 23rd March while the game with Serbia is for The Hive, London on Tuesday, 27th March 2018.

Eagles are to cap their build up with the high-profile friendly against England at the Wembley Stadium in London few days to the kick off of the tournament in Russia.

Last year, Super Eagles surprised bookmakers with an emphatic 4-2 defeat of Argentina in an invitational friendly in Russia. Since then, the team has hug global attention and may not be a surprise if the team becomes the first African side to go beyond the quarterfinal stage after Cameroon, Senegal and Ghana attained that feat at previous tournaments in 1990, 2002 and 2010 events respectively.

Eagles Tipped as One of the Seven Teams to Cause Upset in Russia was last modified: March 21st, 2018 by Igbokwe John

MR P OF THE P SQUARE GROUP – ‘Look into my eyes’