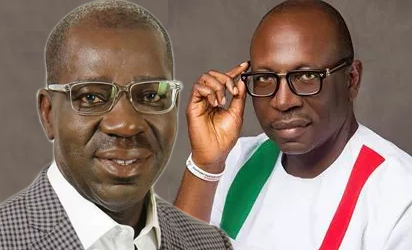 The Edo State Election Tribunal sitting in Benin was full of drama, on Monday, March 6, 2017 when a witness called by the second defendant, Mr. Godwin Obaseki of All Progressives Congress, APC, who was already in the witness box and ready to testify in his defence, was recalled.

The witnesswho was not unidentified, should have been the 67th witness called by Obaseki in his defence before the tribunal.

However, he had to leave the court room after counsel to Obaseki, Adetunji Oyeyipo (SAN) instructed him to do so.

The witness had stood for close to four minutes without being called upon to introduce himself before Oyeyipo told the court that the witness could not be allowed to testify because “we are trying to put in the most necessary witnesses.

Earlier, proceedings at the tribunal were held up for close to two and a half hours as counsel to all the parties argued on whether the counsel to Peoples Democratic Party, PDP, Fred Orbih (SAN), can ask the first witness of the day a particular question.

The witness, Igbinijesu Nosa from Ward nine in Egor Local Government Area of the state, was asked by Orbih about the differences in the number of ballot papers used in the election and the ballot papers issued by the Independent National Electoral Commission, INEC, polling officer.

However, counsel to Obaseki, Oyeyipo, objected to the witness answering the question, arguing that he was not the maker of the documents.

He was supported by counsel to INEC and APC, Onyinye Anumonye and Lateef Fagbemi (SAN), respectively, citing Supreme Court rulings that a witness cannot be cross-examined on a document, which he is not the maker.

Thereafter, the witness, under cross-examination by the petitioners’ counsel, told the court that he does know how accreditation was done using the INEC Voters Register.

By the time the tribunal went on recess to resume at 3p.m., Obaseki had called only four witnesses, bringing to 69 the number of witnesses he had called since he began his defence 10 days ago.

The four witnesses, who came from two local government areas, were, however, united in their testimonies that they have never seen the INEC voters register used for the elections and that the register is not needed to determine over-voting in an election.

Meanwhile, the second respondent closed its defence, yesterday, while the tribunal adjourned sitting to Thursday for the third respondent to open its defence.

How Governors Are Plotting To Produce The...