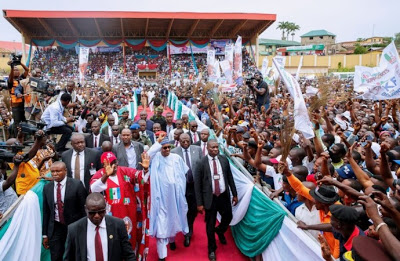 The police have said security detail attached to all important personalities will be withdrawn before Saturday’s governorship election in Ekiti State.

The Deputy Inspector General of Police(DIG) Operations, Habilal Joshak, while speaking in Ado Ekiti on Wednesday, said the withdrawal would enhance the credibility of the election.

He said the security detail of Governor Ayo Fayose, Kayode Fayemi and other affected personalities had been informed of the necessity and they would be required to report to the state police headquarters on Saturday 6am.

Mr Joshak said he would work with one Assistant Inspector General of Police(AIG), H.H. Karma and three Commissioners of Police; Ali Janga, J.B. Kokumo and G.B. Umar, who would man each of the senatorial districts in the state.

“We won’t allow anybody to go to the polling booth with armed men, this is a breach of the Electoral Act,” said Mr. Joshak.

“We have contacted them and they have to be here before election commences. This election must not be compromised. They will be documented and whoever defies this will be sanctioned, because they have been contacted.”

Mr Joshak urged his men not to work for any political party, saying any police officer found doing so would be punished.

“Those who want to create votes where votes are going to be bought will be disappointed. We are not going to allow it,” he said.

“If you cast your votes, you can keep a distance and protect your votes, but if you snatch the ballot, we will cut off your hands, if you run with it, we will stop your legs.

“If you come out with masquerade on the day of election, we will get it arrested and unmask the man behind it.

“My men will be civil, so people are free to come out to vote. Nobody will be harassed, that is not part of our duties.

“Our duty is to secure not only the electoral materials but all the citizens. We are going to be professional and watchful, because we don’t want to be bedeviled with cases of hooliganism, ballot snatching and hate speeches before, during and after this election.”