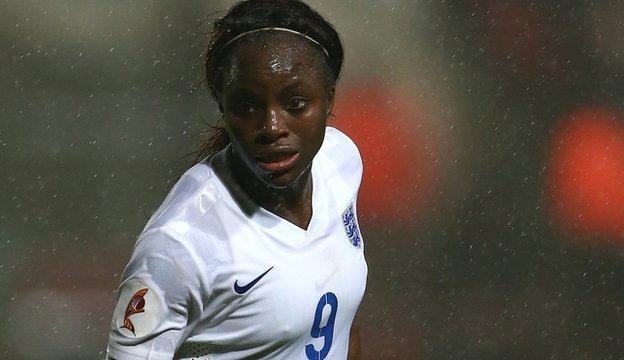 Nigerian born England striker, Eniola Aluko has alleged the Lioness coach, Mark Sampson of bullying her and passing several racist comments on her before finally dropping her from the National team.
Aluko, a 25-year-old trained lawyer who has refused to make any comments publicly since the English FA passed a judgment on the matter finally explained her ordeal in a chat with the BBC UK Sports.
Aluko told the BBC that, under Sampson’s management, “things have happened to me and been said to me with the intention to undermine me as a senior player, with the intention to make me feel small and belittled in front of my team-mates”.
She added: “I felt that there were pointed instances where certain things were said about me in a derogatory way which were intended to undermine my position in the team or intended to undermine my character or create a perception in the team that gave people the impression of me that was negative.”
Aluko describes a team meeting in which Sampson called her “a pain in the arse” after she had scored a hat-trick.
When asked if that was not merely an example of harmless banter, Aluko said: “I think it’s malicious because I don’t remember anybody else who scored a hat-trick being called a ‘pain in the arse’. This is why I allege it is bullying because I go back to the definition that it is targeted behaviour towards one individual.”
When asked to describe the effect this had on her, Aluko said: “I was so anxious all the time. I withdrew.”
When asked what should now happen to Sampson, she said: “What I am concerned about is, whoever the manager is, not being able to deal with a culture which I believe is bullying, which has bullied certain individuals – particularly me in my case – racial slurs at players, victimisation as a result of a player, me, reporting discrimination.”
Aluko says she is concerned by the timing and reasons behind Sampson’s decision to drop her from the England squad, despite her being the top goalscorer in last season’s Women’s Super League.
“I can only state the facts, and the fact is a week before I was dropped from the England team for the first time in 11 years I had given my account of what I felt was discrimination towards me, what I felt was a bullying culture and what I felt was a pattern of behaviour towards me that other individuals had not been through in the team,” she said.
“I’ve suffered a huge detriment. I am only 30 years old. I was planning on playing for England for another four years. So, whichever way you look at it, being a part of that cultural review has potentially cost me my England career.”
She says she was told she was dropped because she “wasn’t abiding by ‘Lioness standards'” – and the example given to her was that she appeared withdrawn in team meetings.
When asked if it is possible that Sampson simply dropped her in good faith, Aluko replied: “I can’t answer that question, I’m not Mark Sampson, but it’s possible, yes.
“But, I would say, if that is the case and if you’re saying to somebody ‘you’ve shown bad behaviour and I’m dropping you for that reason’ – and that’s a legitimate reason – I would expect better examples than ‘you looked withdrawn in a meeting’.
“If you accuse somebody of bad behaviour, you need to come up with better – and, to this day, I haven’t been given any examples.”
Aluko says she believes her sport has been too slow to address the issue of racism.
“The problem with women’s football is that for so many years we have tried to really give it good press, and talk positively about it,” she said.
“But the problem with that is that there becomes a sugar-coating culture where you don’t talk about what is actually going on.
“I think because women’s football has strived so long to have a positive perception in the media, they shy away from dealing with some of the things that go on.
“We need to deal with it because I don’t want this to happen to anyone else again.
“So out of this that’s what I hope would happen – better transparency and a better realisation that this might happen again, and when it happens again it needs be dealt with in a better way that it has been dealt with in my case.”

Meanwhile, Sampson has vehemently denied every allegation against him saying he is not guilty of any racist abuse or bullying.

Last year, a three-month independent investigation did not uphold any of Aluko’s complaints and cleared Sampson and the FA of any wrongdoing.

On Monday, the FA strongly denied Aluko’s claims, insisting the timing of her being dropped was purely coincidental and that all evidence given to the review remained confidential and anonymous.

SEE ALSO: ROONEY HUNTS MANCHESTER AS STERLING SALVAGES A POINT FOR THE BLUES