Rooney Hunts Manchester As Sterling Salvages A Point For The Blues 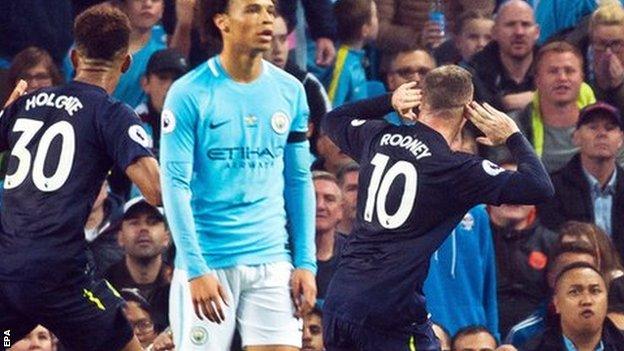 Wayne Rooney became only the second player to score 200 Premier League goals – after former Blackburn and Newcastle striker Alan Shearer – when he gave Everton the lead after 35 minutes at the blue side of Manchester.
The 31-year-old former Manchester United forward cupped his ears in front of the home fans as he celebrated his second goal in two league matches since rejoining Everton.
Perhaps it was no surprise Rooney netted the landmark goal at Etihad Stadium, having also scored his 50th and 150th Premier League goals against United’s neighbours.
However, the ease with which City’s new £35m keeper Ederson allowed his first-time shot in was more of a surprise.
“It is a good contact from Rooney, but you have to say it went straight at Ederson,” said former Toffees and United defender Phil Neville on BBC Radio 5 live. “You have to expect your keeper to save it.”
Rooney, who scored his first top-flight goal as a 16-year-old for the Toffees against Arsenal in October 2002, hit the double century in his 462nd league match in front of his former Red Devils managers Sir Alex Ferguson and Jose Mourinho.
Ultimately, the England international did not prove to be the match-winner like he was against Stoke last weekend – but he was still smiling at the final whistle as the early part of his Everton return continues to be fruitful.
“It was nice with my history with Manchester United – and to do it in such an important game for us and so early in the season, it was a sweet moment,” said Rooney.
“I’m sure the red half of Manchester will have enjoyed it as well.”

Meanwhile, Raheem Sterling’s volley in the later hour of the match salvaged a point for 10-man City as Everton were denied victory on the night Rooney scored his 200th Premier League goal.

Rooney Hunts Manchester As Sterling Salvages A Point For The Blues was last modified: August 22nd, 2017 by Damilare Salami